I copied and pasted a feature class from one enterprise geodatabase to another. In the catalog window, the naming scheme shows up correctly for the new database, but when I add the layer to the map, the naming scheme changes to the old database. New database is called FocalAreasTest1, old database is called FocalAreas. It only appears to affect the feature classes I copied over and not the tables. Any idea why this might be happening and how to fix it? The source looks correct, it's just the name in the TOC. 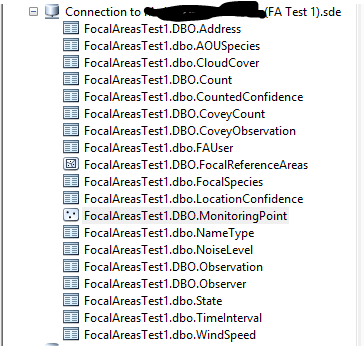 Added MonitoringPoint feature class to the TOC, along with a table that I also copied from old database to new using the same procedures as the feature classes, notice how they are both children of a single parent database (the new one):

Source window for the newly added MonitoringPoint feature class where it looks to come from the correct source:

Nevermind, all I had to do was change the Alias which somehow was set as the old database name...

Nevermind, all I had to do was change the Alias which somehow was set as the old database name...

When you copy-pasted the features from one schema/database to another, it changes the Full Table Name, but the Alias Name remains unchanged. When you add the Feature Class/ Table to ArcMap, the LayerName shows the alias name, not the table name.

If you change the Alias Name in the Properties of the Feature Class in ArcCatalog, then the Layer Name will show as you desired.

You got it right before I could suggest.