My colleague @RichardLeadbeater and I were talking the other day about the continuous cycle of Redistricting that comes directly after the decennial census here is the US. It got us talking more about the location-based workflows and activities that cannot be done without high quality GIS/spatial analytics. While the census has gotten most of the press over the past one to two years, it’s the required actions that follow the census that have a large impact on State and Local jurisdictions; redistricting, voting precinct adjustment, and elections. Let’s talk about them for a bit. 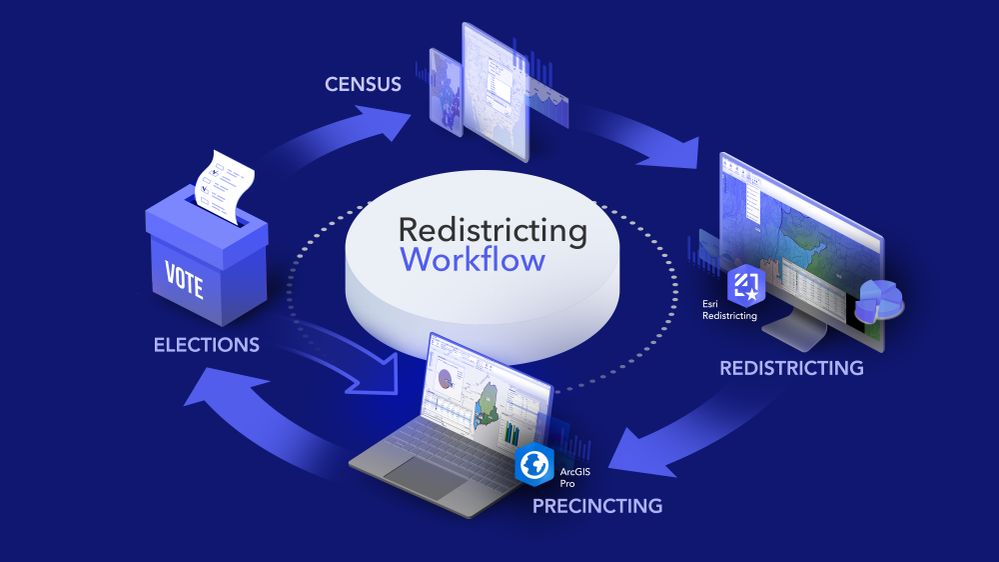 Before I dive too far into Redistricting, I do want to mention how states like California leveraged Esri technology to better manage their census activities. This included identifying historically low response areas, community outreach and education, community outreach and education (https://census.ca.gov/ ), helping direct and track where census enumerators should prioritize where they should concentrate their work. Even though this was the first digital census, there was still a significant on the ground effort to increase census responses. Once the census data collection was completed, the pandemic caused major delays in processing and quality checking. The normal springtime data release has been significantly delayed. State and local governments and their redistricting staff have been clamoring to start the process using 2010 data to test their approach and to start the public outreach and participation process. Esri Redistricting is being used by dozens of customers to more easily re-draw boundaries and comply with the Department of Justice (DOJ) compliance tests to ensure that any plan created complies with Federal requirements. The time savings on the creation of these plans far offsets the time spent by internal staff using other legacy methods.

While not as controversial as Redistricting, precinct creation and maintenance are a regular and time-consuming activity for elections staff. This is an activity that varies considerably between states considering their election formats and factors such as mail in voting, early voting, and population distribution. Jurisdictions can now leverage Esri Redistricting (Enterprise version) to revise their election precincts. There are also ways to leverage ArcGIS Desktop to accomplish this task, which typically occurs prior to each election cycle (often every 2 years). This precincting process can also be used to maintain and update school district boundaries, police precincts or beats, and utility districts.

Election day applications have been the core of Esri’s elections solutions. By creating election outreach websites, poll location maps, wait time applications, and election results application, state and local jurisdictions have improved their processes which typically were paper or phone call intensive and not automated. We have seen several of our customers recognized with national Clearinghouse awards for the efforts and GIS technology has played a significant role in modernizing their operations. Examples include Yolo County and Maricopa County.

Location and spatial data are critical to all of these workflows. GIS and location intelligence have been critical to these efforts and as Esri’s tools have improved, the workflows are more accessible than ever by GIS professionals, senior staff, election commissions, and the public. As I have worked with several jurisdictions throughout my career, I have never been more encouraged by the increased transparency of the redistricting and election process. We still have a long way to go to eliminate partisan and racial gerrymandering but by using the best solutions in the market, state and local agencies can increase the level of trust in the results through active constituent engagement and clarifying the steps taken to ensure that adopted plans comply with the Department of Justice tests. Clarity in the process helps avoid/limit litigation and by doing so, reduces the financial burden on jurisdictions and taxpayers.

As of March 15th, 2021, the U.S. Census Bureau announced they will provide a redistricting summary data file in the legacy format to all states by mid-to-late August 2021 and the user-friendly version will be available by September 2021. Because of this, Esri will tabulate and process the Census Public Law data ahead of the original September 30th data release date. Two weeks after the August release date, Esri will begin data and software updates to current customers’ Esri Redistricting solution. All Esri Redistricting customers should work with their Project Managers on scheduling updates to their software and 2020 redistricting data leading up to the August data release timeline. We will process and deliver the updates to customers in terms of priority by the order of signed agreement. *Please note the August Census PL data release contains the same data as the September 30th delivery, rather in a legacy format.

About the Author
I manage marketing strategy, communications and product marketing for an elite group of products at Esri. I also help draft/refine messaging and artifacts, and promote awareness, demand and adoption among Esri customers.