The results of minimum bounding geometry stretches waaay off

I'm running into some difficulties with the minimum bounding geometry tool, and not for the first time. For some reason, the boundary created through the tool keeps stretching waaay off the area where actual geometry exists. 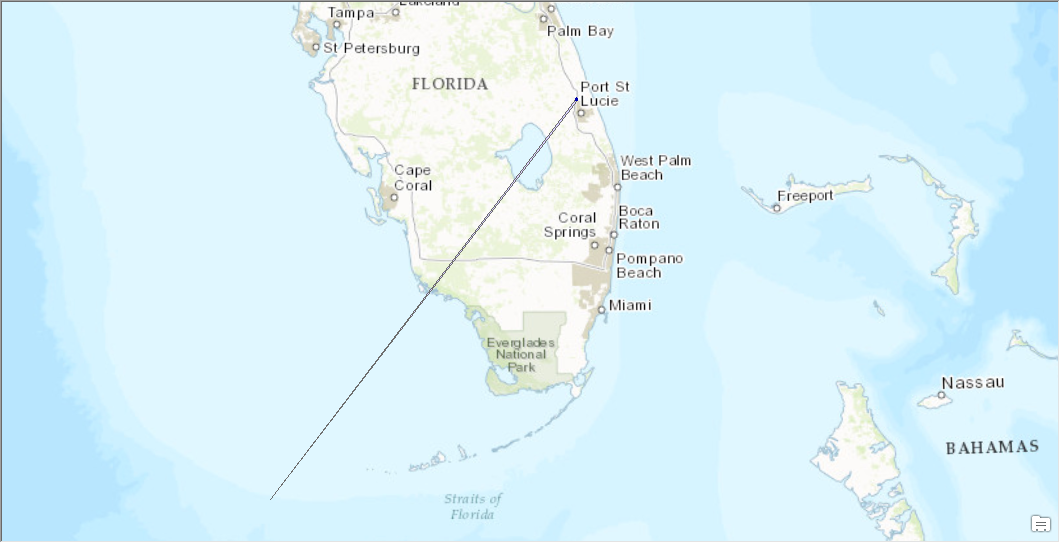 In the image, the actual geometry to create a boundary for is up by in Port St. Lucie.

Has anyone else experienced this issue, and were you able to solve it? I'll keep troubleshooting.

you have a geometry error.  Run a repair geometry tool on the input file assuming it is a normal featureclass.  And minimum bounding geometry really only makes sense if one is using projected data (not data in a projected data frame).  If you want minimum bounding geometry for geographic data, then you should ensure that that the algorithm returns geodesic lines for the edges, because if you project the results, you will not necessarily obtain the same results.

To add to what Dan said about repairing the geometry, if the tool itself doesn't work,..

We occasionally get weird "spikes" in our data, typically from GPS data or things that have been converted, and I'm wondering if that line that shows running from SW->NE on your graphic is one or those.  Sometimes you need to edit things like that manually (if it is actually an error.) to get rid of the vertex that is out in the water in your case.

Hey, thank you. It is still a mystery. I did try to find if there was any geometry in distant placed on the map, and I removed any null geometry, but the issue persisted (except when doing a simple rectangle instead of convex hull using the minimum bounding geometry tool). I just learned some new tricks in data reviewer so I will try to see if there may be other geometry-related issues. Thank you for the help!

I have seen the same behavior that Hannes explained. Desktop Version 10.2.2, all geodatabase feature classes as inputs and outputs. I am using a line feature class with the Convex Hull option. Repair Geometry run against the input initially found errors. I ran Repair Geometry a second time - it found no errors. Even so, the output polygon is extended about 980,000 feet southwest of the actual feature extent.

add a new field and calculate geometry of your input layer.... sort in ascending order to find the offending bit and remove it.  In the case of lines... two points almost coincident, won't be noticed on a map but will be valid.

Another thing that should be done is to recalculate/rebuild any spatial indices that exist.  This should be an automatic process, but it may not be, so it is worthwhile checking.

Thank you for your help, Dan.

I may be missing your point since I haven't found the problematic geometry. I added, calculated and checked various X, Y and Z fields including start, mid and end. The Shape_Length field has normal values. I was expecting to find values that were null or well out of the normal range.

I should mention that the feature class is very large (~ 92K features), has a high number of vertices and has Z values (I did mention this above).

In this sentence, did you mean to say 'invalid'? Sounds like I would have to dig into checking for near-coincident points, which I have not done.

In the case of lines... two points almost coincident, won't be noticed on a map but will be valid.

I deleted and recreated the spatial index. Same problem remained.

Here is a workaround for anyone else having the same issue. Out of curiosity and a need to complete this task, I ran QGIS's Convex Hull tool against the same input geometry. It produced the correct minimum bounding convex polygon that I needed.

Hi Paul, I never did find a solution to this problem, good to know QGIS can handle it. I ended up drawing the bounding box manually since it wasn't a very large area, but having it done automatically would still be nice.

You can also use Bounding Containers without having to go elsewhere