I am trying to calculate a field where i want to exclude any null values. For example. Field calulate field X with any value that is not null from field Y. I have been messing with python, but just can not seem to get this to run properly.

since you are learning, nulls of any sort are treated as boolean False

Only thing I might add is this leverages Falsy behavior in python. 2.3.1 Truth Value Testing

Something to keep in mind is that 0 can also be Falsy along with a few other values (empty strings etc).
Using

isintance() built in is what I see over and over again. =)

Yes confusing isn't it... you have to know what an object or what it  belongs to... a common mistake in numpy

TypeError: isinstance() arg 2 must be a class, type, or tuple of classes and types

because you can't use zero... and the list goes on

Good to know about np.NaNs for that. I have been running into issues with that at work recently. NP methods for scrubbing NaNs seem best, but I have found masked arrays to be annoying in practice. Pandas seems to handle it a little better on the surface.

Do you have any good articles on np.NaN types specifically Dan?

Did you try searching GeoNet for an existing answer? I am quite sure this type of conditional field calculation has been covered a time or two.  That said, see if the following works for you (apply to Field Y using Python parser):

Although my original code would have worked for most data types, it could have given incorrect answers with string fields.

In Python there are several falsy values, i.e., values that are not false but evaluate to false in a Boolean context.  Some common examples are None (the NoneType), "" (empty string), [] empty list, () (empty tuple), and 0 (the number zero).  When using the Python parser with the Field Calculator or cursors with ArcPy, NULLs need to be converted, and Esri has chosen to convert them to None, which is understandable given the built-in data types available with Python.

The issue with my original code is that an empty string would have compared as False, the same as None, but an empty string is not NULL.  Changing the code to explicitly check for None solves this issue.

I'm having problems getting this code to work in Field Calculator (as part of model). To try and make the background short: I have a model where I use a series of Select by Attribute then Calculate Field to score features on the value in the first field. It is being adapted for a webmap using Server, and apparently it can't use layers (so Jayanta's suggestion below won't help). I'm now using a series of Select, Calculate Field (in the output from Select), Join Field back to the original feature class, then another Calculate Field in the original feature class based on the value in the similar field in the output from Select.

Because there are multiple iterations of this sequence, I need to structure the last Calculate Field so that when the value is NULL/None, it doesn't overwrite what's been written in there before. I tried !field_x! if !field_x! is not None but I get the following error:

I tried putting if !field_x! is not None in the code block, but I get the following warning:

Any help you can offer is appreciated. Thanks a lot!

The ! delimeter can only be used in the main Calculate Field expression, the value of the field for that row is subsituted in.  So Joshua Bixby's approach would be to put this in the expression field parameter, not the code block. (Note this fancy but useful construct was a late (2.5) addition to Python: the ternary if.)

Another approach to consider is to use Model Builder's Calculate Value tool and write a function for the code block that uses an update cursor. This is a desirable method when the 'if then' logic gets more complex. A limitation of this is that update cursors don't work on tables with an active join, but since you're using the Join Field tool (which does permanent joins by copying data across, not placing a join on the table) an update cursor would work for you.

Thanks a lot! I haven't really worked much with more complex calculations, so this is good information for me. I updated my expression to include the   else !Field2!   at the end, and it worked. I had tried finding a way to make it pass the features where the Field1 value was null, but obviously that wasn't the right solution.

However, just before reading your message, I also got it to work by using the attached code block and expression (not as elegant though). 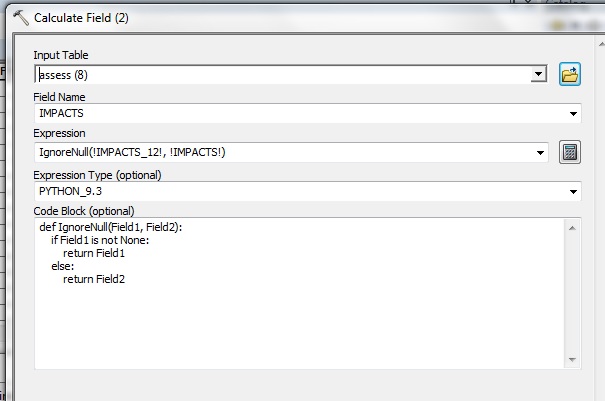 If you could do it using field calculator of attribute table, just follow these steps

1. Select by Attributes with following expression:

2. Once selected, I would use Field Calculator on field "X", with the following expression