I am trying to figure out if I can create a relationship class in our enterprise geodatabase between a feature class and a view or between a spatial view and a view.

Any help would be highly appreciated.

Try Registering the View with Geodatabase and then create the Relationship Class:

Note: Will suggest creating a test view and experimenting with that first, before trying with the actual one.

I have tried that already and I'm still getting the message below.

So, I have created a test non-spatial view for the landowners using the Create Database View tool. I have also registered that view with the enterprise gdb following the instructions at the link above. However, when I'm trying to create a M:N relationship class between the land parcels feature class and that view (they are both owned by the same enterprise gdb) either by right clicking and New > Relationship Class or by using the Create Rewlationship Class tool, I'm getting the message below after I click Finish/Ok. 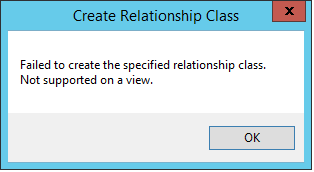 Is there something I'm missing here? Is this do-able at all or should I think of a workaround?

Considering the above, I feel its not do-able then.

Registering a table with the geodatabase allows the table to participate in geodatabase functionality, such as adding subtypes to it, defining domains for fields in the table, and placing the table in a relationship class. If it is a spatial table (a feature class), you can also move it into a feature dataset so it can be used in topologies, networks, terrains, and other feature dataset constructs.

Registering a view with the geodatabase allows the view to be included in read-only feature services.

Also the link that I provided, mentions the above. So it seems that Views cannot participate in a Relationship Class in any scenario.

I did NOT have success with this. It appears that relationship classes cannot work with a view - which I have to believe is some technical limitation. 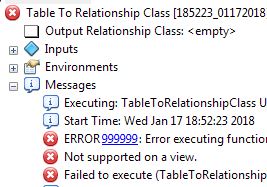 The table to relationship class tool works great for creating a many-to-many relationship when you have/want to manage an intermediate table between non-view objects. 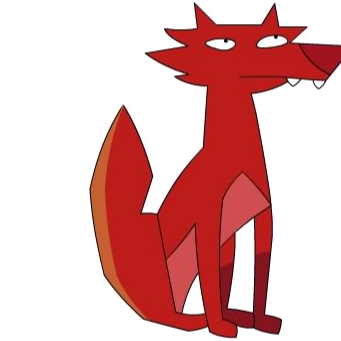 I believe it comes down to how the views are created.  We were still using 10.2 because we could create a spatial views with the old ArcSDE command line tools.  With 10.5 you could register the view with a geoprocessing tool.  But in 10.5 we can't use the relationships with the views.

The workaround was to use a python script (arcpy) every night to go from  spatial view --> to feature class then rebuild relationships.

I have a nightly arcpy script that truncates and appends data from 1 source location to a destination location where a relationship class exists, but I do not need to rebuild the relationship for the relates to function properly.  Just wondering if you really need to perform a nightly rebuild of the relationship after moving the data.

I wouldn't need to if I truncate and append.  In mine I'm overwriting the existing feature class which requires me to rebuild the relationship.  If i have to do it again I might go with truncate and append, but right now it works.

Just checking in to see if relationship classes are supported for non-spatial views. We are running ArcMap Enterprise/Desktop 10.5.1.