I have a CustomTileLayer which I wrote following the sample located here almost verbatim...It seems to work, but in the sample there are never any missing tiles in their dataset - in my case there are often missing tiles, and so I end up with a blank/black square in the map.  What I would like to see instead of a black hole is a lower resolution tile (which does exist).  For example, in the image below I'm zoomed in to level 14.  Zoomed in that far, three tiles show up, but the upper-right one is missing.  Ideally I would have the hole filled with the next available lower resolution tile. If a level 13 tile exists at that location, then it would use the proper quadrant of that tile.  I would have thought it would work that way by default, but apparently not. Is there something I've missed. 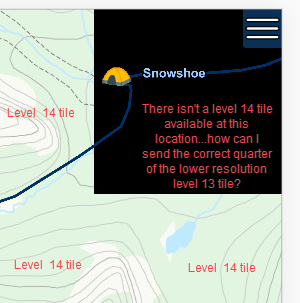