I'm trying to figure out how a user has got himself in this predicament.  Last month he had Windows 7 go bad on his PC, so we reinstalled windows, drivers, and apps. He reinstalled Desktop 10.2.2 from media I had downloaded, don't know which patches he applied.  There was a partial backup of some of his data and settings, so some of the maps and data he had on C: were lost.  But many of his projects and much of his GIS data were on an external USB drive,  so I thought at least he wouldn't have trouble with that source.  However, some of those mxd's don't completely load.  Looking at the data sets that will not draw in the Catalog window, we see that they are listed, but have a blue ? in front of them, not the yellow !.  All the ones like this that I saw are shapefiles.  They don't draw in ArcMap or preview in catalog. What does the blue question mark mean?

I suggested that he point Windows Explorer at the top folder of his GIS data on the USB drive and try a reset of owner to be his new login to everything in the tree, even though his new log in appears to be the same as his old log in.

Any change that when the shape file were restored you didn't restore all the files (i.e. file extensions)?  Shape files are more than just the .shp file.  Just throwing that out as a guess.

I'll be looking at that when I get a chance to look at the USB drive.  However, the USB drive in question was not restored.  It supposedly is in the same condition and has the same contents as before the crash.  The only restore we did was on the external HD, C:\.

As Rebecca said, chances are the shapefile could have got corrupted.

Is this happening for all the shapefiles in the external HD?

Try opening the shapefiles on a different machine.

I finally got a shot to investigate this while the user is away today.  This is a strange one.  If you look at the Cowiche folder, for example, in catalog,  you see that some shapefiles are being good,  some have the ? mark. Looks like a green question mark to me.  The user told me blue.  Look at the cowiche folder in windows and the good and the bad shapefiles look like they have all the component files they need.  Don't know why he has .cpg files instead of .shp.xml files, but the good shapefiles have this too.  CowicheAccessPts. is missing a .sbn, but the other shapefiles have it.

And the geodatabase CowichePhoto.gdb?  It won't open either.

Next I'm going to try plugging this USB drive into a laptop and examine this folder. 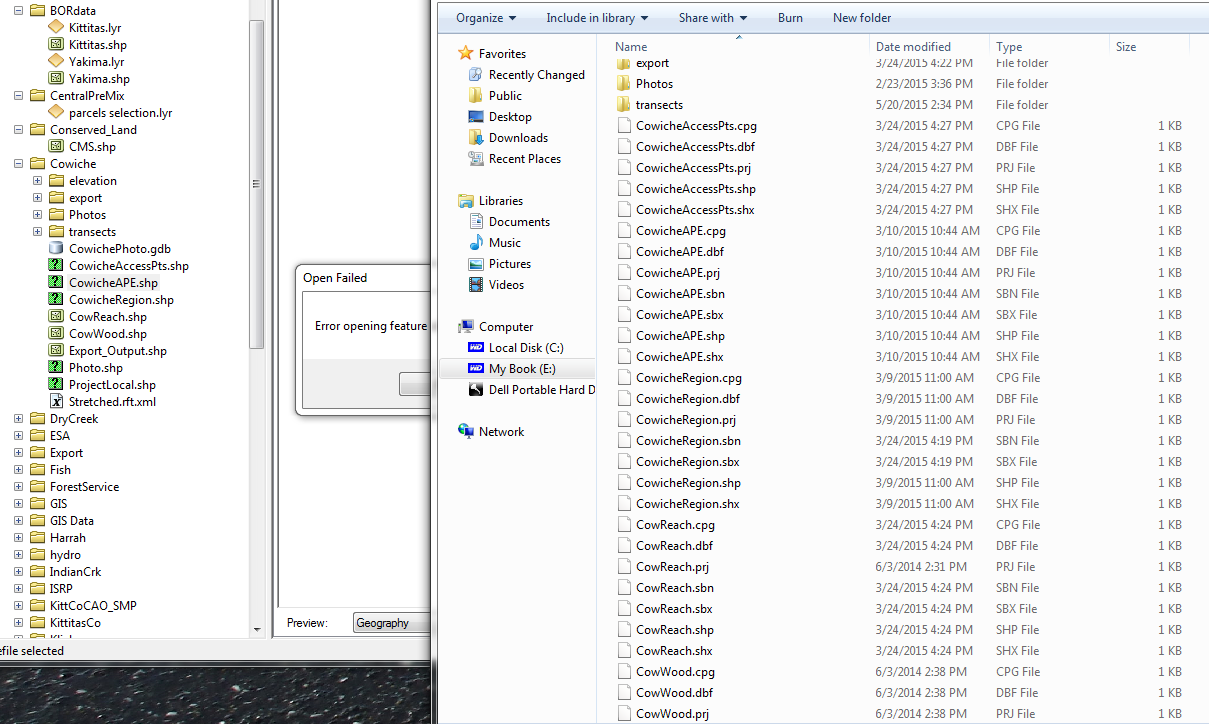 interesting that the size of all the shapefile files are 1kb.  I wonder if these were edited or open when the machine crashed and they were corrupted that way?  But hopefully your USB is ok!

I tired the USB drive on a different Win 7 64 bit machine, also running Desktop 10.2.2.  Same behavior,  same shapefiles bad, reading from the USB or copied to the different machine's hard drive.  Owner is set to Everyone in all the shapefile component files that I have examined.

Here's a zip file containing one bad shapefile CowicheRegion, and one good shapefile from the same folder.

I thought maybe the problem with the bad one was filename length....which still may be an issue...but I copied the files and renamed them to cowreg3 and that didn't help.  I also just made a copy of the .dbf file and looked at is in ArcCatalog and it is also empty (but a copy of the good .dbf has one record).

I think that it may really be courrpt, but there are some old scripts that are supposed to help fix corrupt shapefiles....I haven't used them so I do not know it they work.  I did a browser search for "repair shapefile" and this is just one of the links

BTW I have a script/tool (not posted yet) to walk thru all the folders and spit out a .csv and excel sheet of all the broken links.  In case you want to see what the problem layers may be....maybe these bad shapes aren't even being used . ??

I opened several dbf files with OpenOffice Calc, which presents dbf as a spreadheet.  The bad shapefiles' dbfs opened are binary junk, while the good shapefiles' opened as one line containing a filed definition Name,C,50.  Looks like the user has more bad luck than just his HD crash.

Maybe the tool will not run on Win 7: http://answers.microsoft.com/en-us/windows/forum/windows_7-windows_programs/net-framework-version-11...