In Arc Catalog there is a column heading called "# of Features" that NEVER remains updated, nor displays anything but ZERO.  Why even have this option?  What would make it work properly???

Here is what I refer:

If you will notice when adding the "# of Features" column you add that option from a list of columns that come from the layers Metadata. So you first have to show the description tab for the layer before this column is populated. 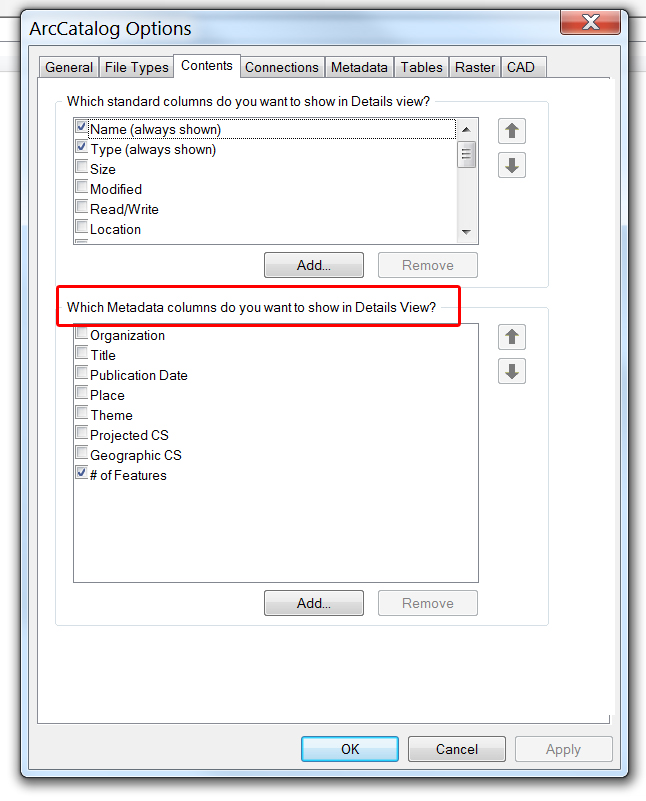 Thanks Robert, but I did know that.  It just seems counterproductive to me that this would be an option of display that only works if you toggle the Description Tab first (since it does display in both the Contents and Preview tabs).  It's analogous to not showing the "Date Modified" field in Windows Explorer until you first OPEN the Word Document, then close it.

Thank you for posting.

You should start a new Idea Submitting a New Idea for changing this functionality then.

It is a trade off between functionality and performance.  If enabling "# of features" meant that ArcCatalog would automatically display the number of features for every feature class it can find, the indexing of your local drives, and potentially network drives and enterprise geodatabases, would bog down the local machine and even potentially servers for quite some time.  And, what if dozens of people all turned it on at the same time and had the same data connections accessible, it would generate an enormous amount of indexing traffic on network and server resources.

I see that Esri had 3 options: 1) simply don't offer # of features as an option, 2) have ArcCatalog go crazy indexing everything it can touch to determine the number of features, or 3) balance #1 and #2 to offer # of features but have it get updated as each data set's metadata is touched.  Did Esri pick the best option?  I think they picked what they thought was best.