There are a number of threads on this particular subject and I wonder if someone could guide me through the logic I need to follow in order process a feature class of intersection points.

On a subset of my main centerlines I have run the intersect tool; the ensuing feature class is a multi-part point feature class.  According to multipart feature | Definition - Esri Support GIS Dictionary , In ArcGIS, a digital representation of a place or thing that has more than one part but is defined as one feature because it references one set of attributes. I'm trying to figure out if this works to my advantage for what I want to do or to my disadvantage.

The point feature class that results from running the intersection tool looks something like this: 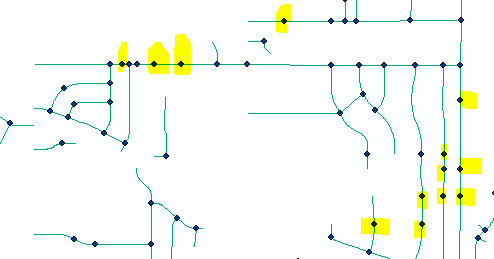 Those intersection points I've highlighted represent what I would refer to as 'pass through' intersections. That is, there are two points located at the exact same location, but the streets on either side of it are the same.  For example, S Joes Ln and S Joes Ln. Here in Utah we have numeric as well as named streets.  The streets I'm working on are named only.  If E 4500 S intersects with S Joes Ln, all we would refer to as the intersection is 4500 S Joes Ln; basicially a house number and a street name.

What I would like to do is get rid of those pass through intersection points.  This brings me back to the definition of a multipart point feature class;  how can I select just those points that have the same data on one side and the other?  FWIW, I've converted the original multipart point feature class into a single part.  I don't really know if I've gained anything by doing that however.

Finally, I would like to merge those true intersections into one point that provides the two different streets:

Notice that there are 3 points at the selected location which is the intersection of Lancer & Market.  I don't care about Lancer and Lancer;  I can create and alternate name of Market & Lancer for Lancer & Market.

It appears as though you could eliminate much of the issues by using the Dissolve tool on the FullName attribute to merge the mulitiple segments of the same road into a single feature.

It appears as though you could eliminate much of the issues by using the Dissolve tool on the FullName attribute to merge the mulitiple segments of the same road into a single feature.

Just gave that a try and unfortunately I lost all the intersects on same-named streets: 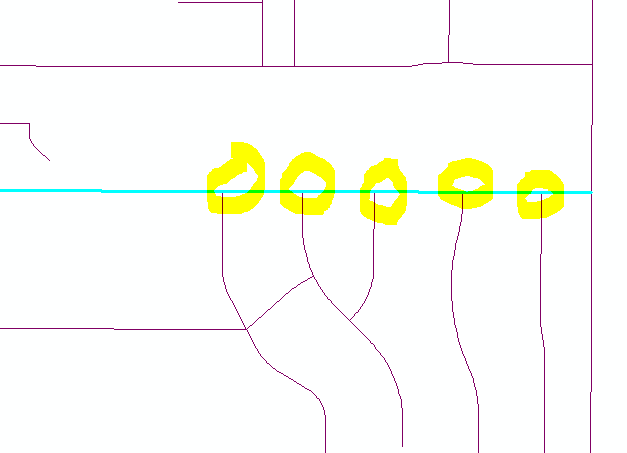 That is one selected street, not 6.

[edited]   But...  Moments later I tried something else.  I performed a spatial join between the intersection points and the dissolved streets.  After that, I  selected from the new feature class where Points_Fullname = Streets_Dissolve_Fullname.  That provides those that are pass through intersections. Flip the selection and there you have it: 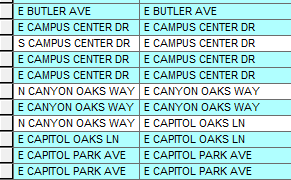 Switch the selected set, and these are the true intersections: 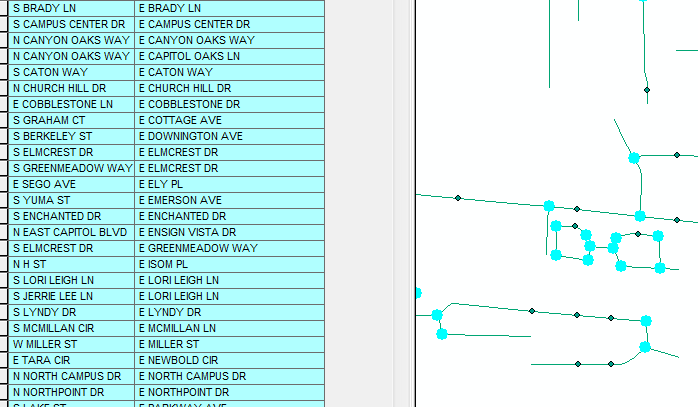 The suggestion by Jim Cousins works.  They key is to Dissolve by streetname before running the Intersect to derive the intersection points.

Chris-  what you show is what I expected, but when I tried it, I lost the intersections.  I tried both outputting multipart lines and single part lines and got the same results as shown above.  Beats me!  Bottom line is I'm good to go!