by ThomasBennett1
New Contributor II
On the ArcMap Versioning toolbar - the Create New Version Toolbar doesn't indicate the database name when you are Creating a New Version. If you have feature classes from multiple databases in your MXD  the Parent Version pulldown menu just says "sde.default" and or "dbo.default" for all the databases and there is no way to know which parent table is which.  There is also no consistent behaviour between the which layer/feature class you have selected in the table of contents and which parent version is on the top of the pulldown list.  So you have to guess which one you actually have selected and then confirm once you have already created the version that you created it from the parent table you intended.

Suggestion is to add the table name into the Parent Version pulldown, or if text layout space is too limiting, then add a second pulldown menu for the Database Connection.

by ThomasBennett1
Forgot my screenshot example... 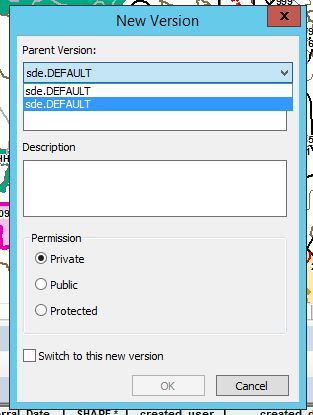