I am trying to create a model in ArcMap 10.7.1 that will create a weighted overlay of a population density raster, a land cover raster, and a traffic volume raster. The goal is for the user to choose which weight to give each raster. I have been trying to use the Calculate Value (model builder only) tool to create a weighted overlay table that will allow the user to enter the weights. The model will be published as a geoprocessing service and used within a web mapping application.

This is my model, followed by a screenshot of the code used in the calculate value tool:

I created a variable for the expression for the calculate value tool, which uses inline variable substitution to allow the user to enter the weights as model parameters. Here is the expression:

Here is the table that appears to be used by the weighted overlay tool when I run each tool individually in model builder: 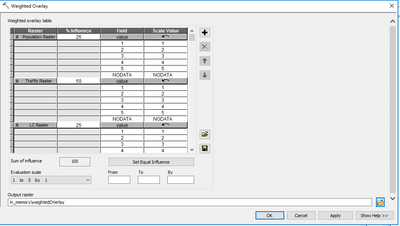 Finally, here is the GUI along with the error message that I receive: 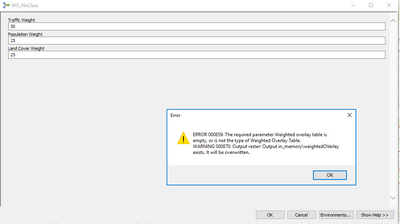 If anyone has any ideas on why my weighted overlay table is not being read as the correct type, or notices any other issue that may be causing this result, I would greatly appreciate it!