Delete (X) in Editor widget does not honor Ownership-based Access Control of features.

UPDATE 29.01.2016: Turns out that it does honor Ownership-based access controls, the reason it was not seems to be that the user that managed to delete features owned by other users was that said owner was both a sysadmin in the database instance (SQL server) and the database owner of the database. That must override the access controls enforced in the feature service.

I think I have discovered a bug where you can delete a feature by using the delete tool in the editor widget to delete features that are owned by a user other than your user. This is even though that the feature service (hosted locally on own AGS) has this properly set and it has been verified to work both in ArcGIS for Desktop and in the ArcGIS for Collector app.

Odd thing is that the attribute editing window DOES honor this so you are not presented with the delete button at the bottom of the window if you select it through the Editor widget and use the attribute edit functionality to open it for features that belong to a different user than yours. See image below for graphic details. 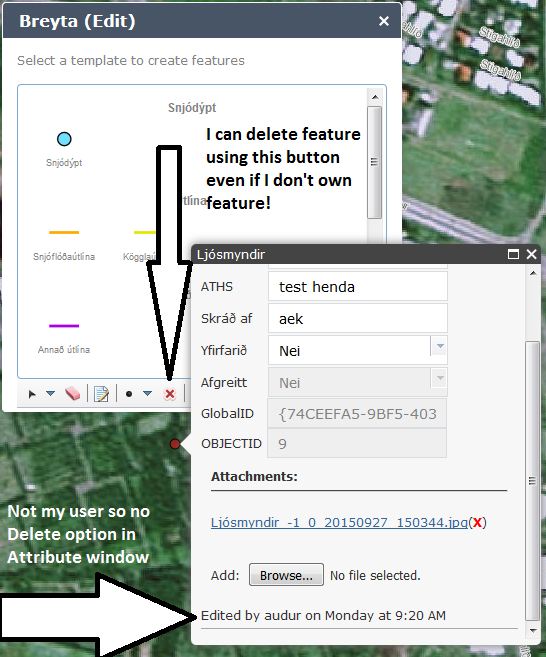 PS: Also another "minor" issue that I've found is with the reshape tool in the Editor widget is extremely hazardous to use because if you use it incorrectly it deletes the feature you were trying to reshape. Example would be if you snap to the end of a line, draw a new graphic in some direction away from the original line and double click to finish the sketch it just deletes the original feature. This is kind of bad

Message was edited by: Bogi Bjornsson