I had noted a measurement bug with the old Incident Analysis widget in WAB that affected it all of the time:

So I just checked back in today to tinker with the latest WAB in the AGOL Online IDE.. using the AGOL hosted Web App Builder (all done on ArcGIS Online today).. I see two issues.  Both of these widgets did not work or had a bug.

1.  There is an Incident Analysis Widget and what appears (???) to be an identical widget named Situational Awareness:

They even both have Doc pages in the API Docs. Which are basically identical. Unless I'm missing something (could very well be!!)

However, I have an idea what happened.  They accidentally published the new widget without removing the old one, after my previous bug thread.  So, upon seeing this I decided to test distances measured by them with Locate Incident point. 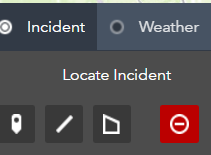 I noticed one measured correctly.  One measured.. wrong.  The same exact mistake I noted in the first thread, where it came up about 20% short on distance repeatedly.

The one that works fine is Incident Analysis - this is ok. For measurement.  Yet oddly enough, it just sat there and never worked, it never gave any results, just the progress bar sitting there and no results. No http request in network traffic pending or timed out or anything, all 200 code. 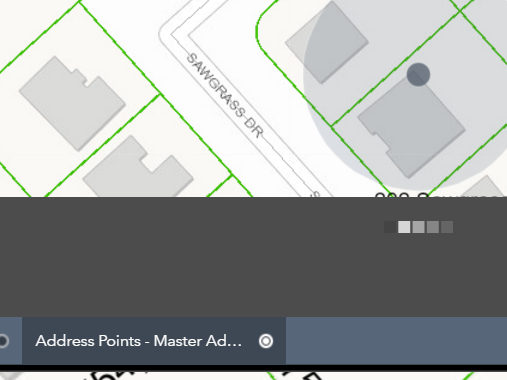 The one that has measurement the bug is Situational Awareness  (distance is wrong, this is the old version of the widget I presume and should be removed ??..)  I could do screenshots but I think the previous threads explain it in enough detail.  And yet... it works, at least. It returned results when I used it for Summary for Address points, fire stations and a few other layers I tested.

So one doesn't work, the other works but the buffer measurement is wrong.  Team Esri - Thoughts?  I can contact the Support folks if that will help, to test.

Kevin MacLeod‌ The two widgets are there by design. At the next release, you will notice the UI for the Situational Awareness is now different, in part to help remove some of the confusion, but also to include a number of new enhancements to support workflows requested by our user community. As part of that UI design we have removed the buffer slider. The input distance is now an explicit distance input by the user. This should resolve the behavior you noted above.

Enhancements to the widget referenced above:

Let me know if you have additional questions.

Thanks. So the existing measurement bug with Situation Awareness, as currently on the production ArcGIS.com, which measures distances incorrectly (too short!) will be fixed?

And, it would be nice to type a number and the slider automatically move. A handler to move it on the key typing event.

At the moment, it is still perplexing to me. The current widgets are from all points identical to me, at the current versions:: 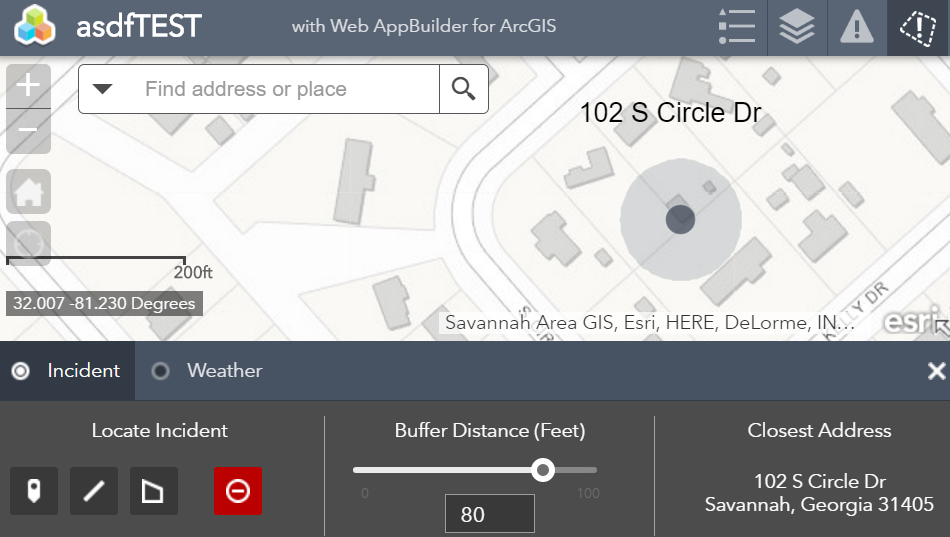 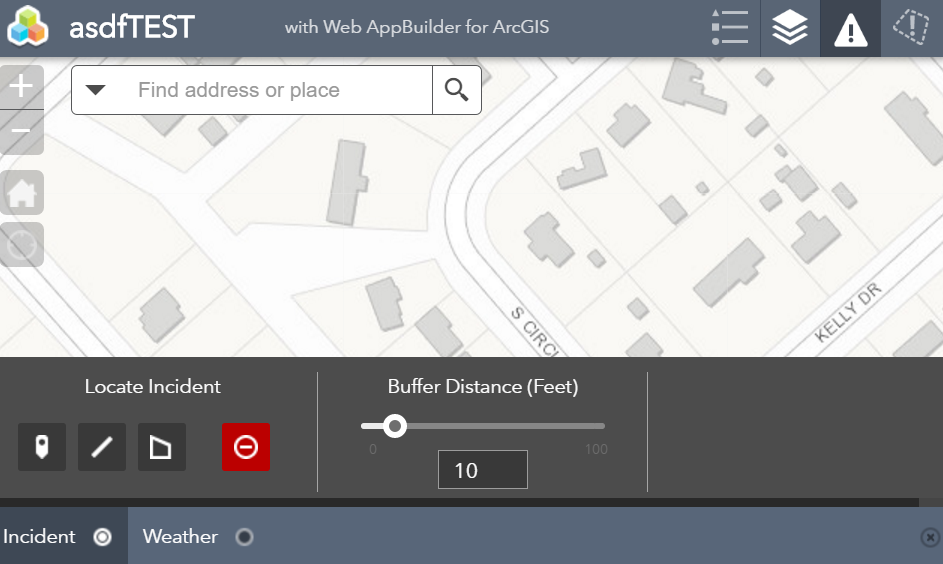 But - I guess that new functionality you are mentioning will be coming Nikki. Sounds good!

So I had an idea to use this widget. It would be perfect for sales prices analysis for parcels. I was going to use the "new" version of the widget, the Situational Awareness.  I have a field "Sales Price".  I want to show the Sum, Average, Min and Max. (this is all for the same field, Sales Price)  I label these and choose the appropriate math for the Summary operation. However, after clicking OK, if I go back in I find it changes them all to SUM if that was the first row (the top one). If Average was on top, it sets them all to Average. It also makes the top label the same all the way down. They all say Sum if that was the top one. I confirmed this in a new test app with nothing else in it.  I'm on WAB DE 2.9 with a 10.6.1 service.  Tech Support is working on assigning a Bug # to it which I'll post once it is created.

Second issue, it still seems the Situational Awareness widget is simply a newer Incident Analysis widget. Why keep both. Now interestingly, this bug is not in the old one, the Incident widget. It calculates the Sum, Avg and Min and Max correctly! But... it doesn't let me label them. That was new feature added to the SA version of the widget and is essential to have, for what I want to do. I need to communicate to realtors what is being displayed. And so I need the new version (the SA one) to work. Furthermore there is still the distance slider bug in the old Incident analysis widget. If the user types a number, let's say 80, and hits the point on the map, it goes with the value of the slider. You MUST hit return for the slider to move to correspond with the typed distance value. That is a non-starter. Users will miss that step. I did. It's not intuitive. As soon as the user is done typing the bar should update to match the distance of the typed number. Or it should sync up upon users hitting the Point button. At some point, they need to be in sync. Try it now. You will see, if you type 80 ft but it was on the default of 10 ft and you hit a point without hitting return it does a 10 ft buffer on the map.  At least the other bug of overpredicting distance is fixed now and both widgets measure correctly (although this bug regarding the bar vs typed number is still an issue).  So in short, both widgets have show-stopping bugs. I guess it would be best to just fix the Math and Label bug of Situational Awareness since it is the 'new' version.  I will be glad to test any workaround or so forth.  I think this widget is a very important widget to 'summarize' info in an area for multiple layers, and not only for disasters.

One more bug I noticed, the points for Schools never show up.  SagisOrg2018/Schools (MapServer) 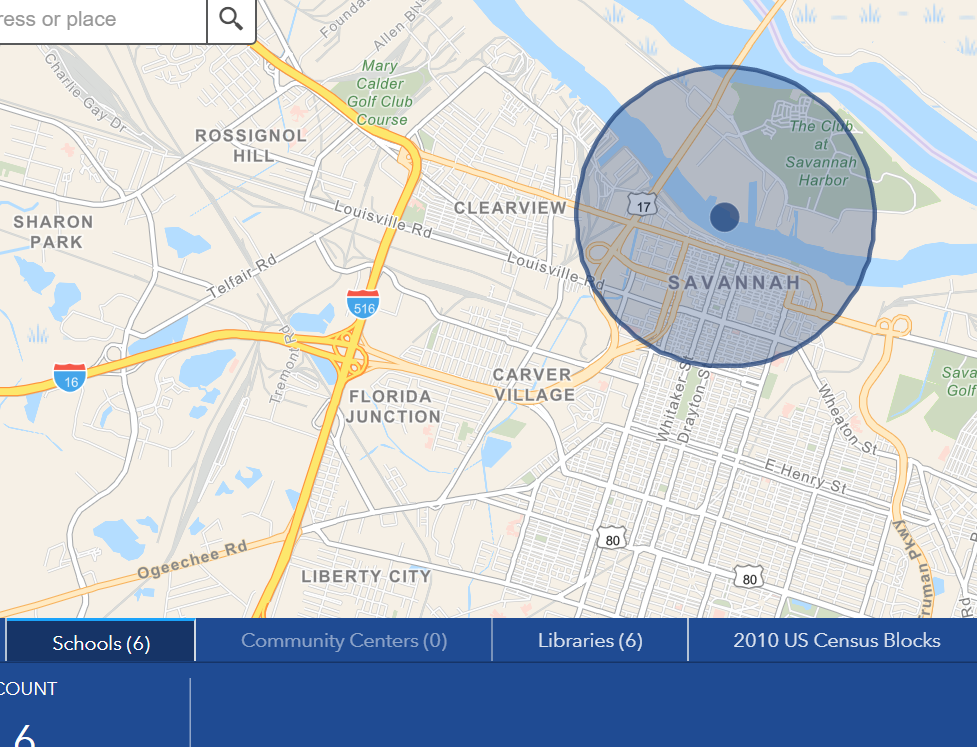 Libraries shows up fine, etc. But not schools.

Note, this bug and the error where it sets all the fields to the same thing (i.e. SUM instead of AVG or MIN and MAX) is also reproducible on ArcGIS Online - I just tested on our Org on WAB AGOL.

Last, this is a feature enhancement that would be just be a nice-to-have type thing.  It would be nice for users to be able to change distance units. For example, from feet to miles.  Let them change it at run time in a drop-down, i.e. like Measurement.

First up one request: ability to change units in Situational Awareness. Like from feet to miles. I want users to be able to get specific with Feet but then if they wanted to do a mile or two.... they type so many digits for feet it runs out of space. Just have a dropdown next to the buffer input for choosing units and let us choose what is in the list. E.g. feet, miles, yards. For example.

Next up, with Incident Analysis, if you type in the number and hit the Point to create a buffer, it does what the slider has for measurement. Users will find this very confusing. If you hit Enter, yes it moves the slider. But, if the slider has a default of 10 miles for example, and you type "2" and place a point, it will make a 10 mile buffer. Unless you hit Enter, which is not discoverable, and users will not realize this and will find this confusing. In summary If you type a number, it should move the slider.  Not needing user to click Enter.  Second, if the layers aren't on, it doesn't show them.  It should.

However, the Situation Awareness does do that, it shows them.  I still re-emphasize these two widgets are basically identical and I'm confused by that. It looks like Situational Awareness is simply a newer version.

What I want to do is create a 'property analysis' widget with these to show min, max, avg and total property value. Then another instance of it to highlight schools, libraries, etc in the buffer. That is another point: I would like to be able to put these in to a widget Group in launchpad (not possible it says) and also have multiple instances (not possible, apparently, out of the box, these would be feature enhancements).

aaaand another reason the json needs to sync in webmaps.  https://community.esri.com/ideas/16701-keep-webmap-service-item-id-static

This widget and some others, instead of referring to the service, refer to the webmap service layer id.  It would be better if all WAB widgets from Esri would point to the service. Like Robert's eSearch. Why? Because I cloned my app. I then pointed to another service, where I simply added a few more layers. I thought I could just copy the Situational Awareness widget config. Nope. Like for Query, it did not work. The reason? Instead of simply pointing to a service then configuring fields like Robert's eSearch, which would simply enable Search and Replace to swap out URLs for a service in the Config... it uses the webmap server and layer id. Which change. And get hardcoded in json. So two requests:  1) do not use webmap id in config files. Use the service URL itself ONLY.  2) make webmaps json stay in sync with service as in idea above so we don't need to keep re-adding services if we add a layer and also if we DO re-add the service, keep the id's the same or let us change them back, and with a supported tool not an unsupported workaround

Short story: Esri WAB team please make your config files like Robert's eSearch. Point to a service, and configure fields.  Do not point to the intermediary webmap json layer id because it is a problem for a number of reasons. It's simply more work/less reliable than pointing straight to a URL