We have the Inbox enabled on our Survey123 forms, but when viewed through the Inbox, the repeats show empty / blank. The forms were all built in Survey123 Connect, and have been tested on desktop and mobile devices. 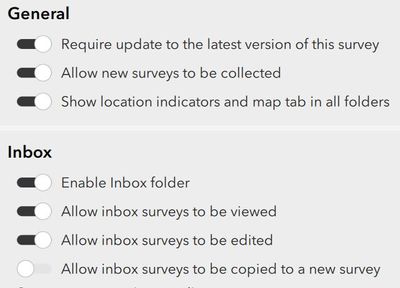 The forms contain nested repeats, and where begin repeat occurs, query allowUpdates=true is set within bind::esri:parameters. The repeat data are missing when opened in the Inbox in both View and Edit modes. Images below show the survey repeats from the Inbox in View and Edit modes respectively. The repeats were submitted originally with data, but are blank in the Inbox. Checking via the survey123 website and the feature service, the repeat data to exist. They are just not accessible via the Inbox.

Hi. Repeat records are not downloaded into the Inbox unless you specifically ask for it.

Set the bind::esri:parameters value for your repeat to query and all repeat records will be downloaded. Do the same in your nested repeats if you like.

The query parameter can be refined. For example, you could say query="severity='high'"  You can also use other parameter such as allowUpdates to control if records from the repeat can be updated or not.

As stated in my original post above, query allowUpdates=true is already specified in the repeat and nested repeat, but the repeat data are still not being returned in Inbox.