I recently downloaded a survey initially publish in 3.7 (think) and republished it in 3.9. Now that I've done this, all of the select_one questions are acting like select_multiples (See pictures below) and the Relevant logic isn't working either so the hidden relevant question are not displaying. It should be noted that in the display window of Survey123 connect, everything appears to work correctly, it even works fine in the blank webform. When attempting to edit a record (and add a new one) using a URL Such as

This issue manifests. It also works properly if a survey already exists for the record being edited. This only happens when creating a new survey for a related record that does not have a survey already filled out for it.

I have tried switching the objectId string to globalId and the problem still persists.

Update : Republishing the survey from an older version of Connect, v3.7, eliminates the problem. This is still an issue as the survey is still under review an in the development process, so updates are still being made so version locking is very inconvenient. 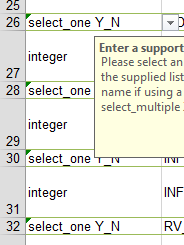 The issue you described sounds like this existing salesforce issue:

BUG-000130365 The Select_One question records the first choice clicked in a repeat, instead of the final choice selected.

I encourage you to submit this issue as a bug via Esri Support. Our Support team will assign an official bug number for your records. This number can be used to search for and subscribe to the bug on the Esri Support site. If the issue is reported by other customers it will be attached to the same bug report, which helps us assess the impact of the issue and prioritize it accordingly.