We have currently deployed several surveys created via Survey123 Connect that are being used by ~200 users in our ArcGIS Online organization and allow them to attach photos. Lately, we've been getting complaints of photos coming out blurry, and after checking, it appears the photos are being reduced in resolution and compressed. This is despite the photo size setting in Connect being set to "Unrestricted".

We've tested taking photos directly in the S123 app vs. attaching photos taken through the default camera app. It appears attaching a photo rather than using the camera in the survey does produce better quality, but the photo is still reduced in size and quality from the original.

To illustrate the problem, attached are two images: a photo taken using my phone's camera app, and the same photo  after being attached to the survey.

To further complicate things, this issue isn't happening for everyone, and we're thinking the issue may be tied to what phone is being used. The majority of our users are using S123 with phones supplied by our organization (iPhone 6 or 7). However, my coworker and I both use Android Moto devices and my photos are being affected while hers are not. We haven't been able to find any settings that could be responsible for this difference.

We've just put a call in to Esri about this issue, but I figured I would ask here in case anyone else has run into it. Any assistance would be greatly appreciated!

Annotation images are restricted to the phone's screen size as the user interacts with the image via the screen - do the photo sizes line up with the screen size of the device?

While there hasn't been any resolution on this issue, we have found a workaround.

I'm not going to mark this as answered/solved, as we still can't see why the annotate style is causing such a degradation in quality. However, at least our users can now see features in their photos.

Hi. Have you checked the Images section of your survey in Connect? By default, the Survey123 field app reduces  the size of photos to 640px in the longest edge. You can change this setting, for example, to 1920px. 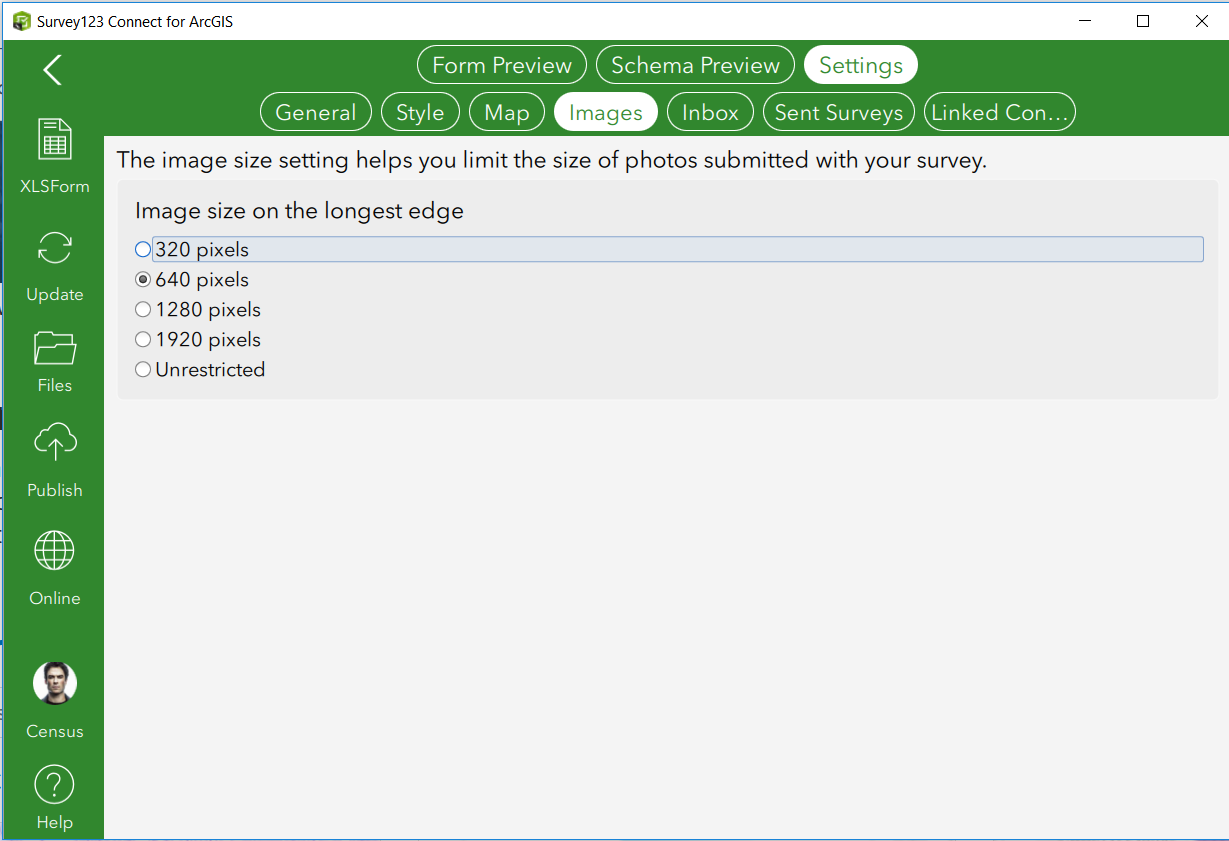 Thanks for the reply. Yes - we have checked the image setting in Connect and it is set to "Unrestricted".

Currently, it appears the image question respects this setting, but an image question with an annotation appearance does not. The bizarre thing is, while most users are affected by this issue, some are not and their photos are high quality in both cases.

The only other thing I can think of is to update to a newer version of Connect. We are currently several versions behind due to IT policy restrictions.

Annotation images are restricted to the phone's screen size as the user interacts with the image via the screen - do the photo sizes line up with the screen size of the device?

Sorry for the late reply. You are correct, the images generally line up with the screen size. However, the bizarre thing is some users aren't limited by this at all, and their photos are much larger. We haven't been able to figure out the cause of this inconsistency.

While we like the added functionality of enabling users to annotate their photos, because of the screen size limitation, we will probably only be using generic photo questions from now on. I understand limiting the photo size so users don't have to zoom and pan, but it would be nice if the annotation photo question could follow the same options for image sizes as a generic photo question.

The larger images should be coming from plain image questions if you have the size set to 'unrestricted' or possibly added via the photo browser.

I this item solved?

5 megs pictures on the phone are resized to 500ish k once downloaded from the Feature Service.

Size is set to unlimited as per Ismael recommendantion.

This was very interesting to hear about the Annotation function downgrading the image. We just implemented a project and found that the annotated quality is sub-par. We actually started to use APPLE built in annotation features on the iOS and uploaded the photos. Thats where we discovered that we are pretty sure the unrestricted image quality is not being honored.

Using an iphone 6s Plus and an iPad 6th generation

Unrestricted it came in at

its also inconsistent, in another attempt the uploaded photo from the camera roll was also downgraded.

I am submitting a bug ticket with ESRI, as we are certain that in March to June. We had a similar problem, where we then changed it to unrestricted. Back in APRIL. Our photos were consistently saved unrestricted with 2.4 to 3.6 mb. We then attempted to use the same SURVEY and upload/take new images that we created back in March but on the latest version of Survey123. We are finding that the images uploaded are NOT UNRESTRICTED and are being downgraded.

What version of iOS are you using with the latest survey123 field app? We have an issue with browsing the camera roll on iOS 13 crashing the field app. So I am guessing you are not using the latest iOS 13 on your device, otherwise, you might run into this crash issue.

Do you only use iOS device for yor project?