No point layer with survey

Hi, I recently had issues exporting my survey in FGDB from survey123 web or AGOL portal. Think I just found out whats happening but I don't know what causes this... When I edit a form on the field there's is no point shape for the form so I'm populating tables but there's no geometry associated. Can anyone help me please. Here is my xlsForm. 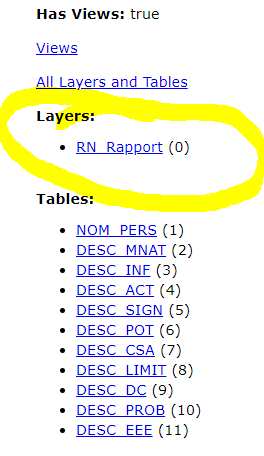 Currently there is not a way to publish a Survey123 survey that only creates a hosted table, Survey123 will always create a hosted feature service.

If you are seeing issues exporting the data from ArcGIS Online I would suggest opening a ticket with Esri Technical Support and they will be able to assist in diagnosing the error message and reviewing the hosted feature service.

This is my point. I know Survey123 uses points by default so why do I get (0) when I make forms? (See picture in the post)

Please use this link for reference: Using the Services Directory—ArcGIS REST API | ArcGIS for Developers

I'm not really comfortable with indexes but I understand it is normal. Will this layer's REST endpoint will have a higher number than 0 somehow?

Any additional layers and tables in the service will have higher layer indexes but that specific RN_rapport layer should always have an index of 0.

For example if the service was originally published as:

Then the layers were reordered in ArcGIS Desktop and the service was overwritten it could then show as:

Where Layer A used to be index 0 but is now index 1 after the change. The index positions should not change though, the first layer should have an index of 0.

Thanks a lot for the explanation