Only 6 surveys at a time appear in the My Surveys page before the user scrolls down.

Is there any way to display more? Like can the thumbnail be removed and only show the text, or can surveys be grouped into categories?

My users are going to have a lot of surveys. 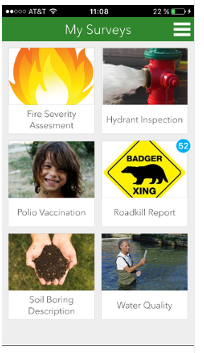 The gallery size is determined automatically based on the reported resolution of your device. Currently, it isn't possible to change the size of an individual item.

Are there other aspects of survey organization on the home screen you would like to see?

My field staff could have potentially up to 30 forms , so that's a lot of scrolling through.

It would be very useful if surveys could be added to folders/categories so on the homepage would be thumbnails of the folders e.g. Inspections, Logs, etc. Then when the user clicks Inspections all the survey forms appear.

I have one project for example called Habitat Improvement Schemes, where they will records Points, lines and Polygons to marks out areas. I'm thinking rather than 3 separate survey123 forms would it be better to add the these to Collector?

Thanks for the feedback.  We don't have any immediate plans to change the view of the survey gallery, but I've recorded your feedback so that we can bring it into consideration.

You could use Groups like Collector does.  That may help.

Can you explain a bit more on using groups for organising surveys in survey123?

I think it would be really useful for organising surveys.

On the Habitat Improvement Schemes, Collector may make sense depending on the level of smart form needed; alternatively, a form could be designed that incorporates both the point and polygon portions through the use of repeats.

Thanks James, I'll look into that.