I am running into issues with a locator that we have published as a service. We have 4 feature class roles in our locator, which include address points, street centerlines, cities, and Landmarks (POI).  It was built with the 'Create Locator' tool in 2.7

Within our Landmarks (POI) data, we have street intersections. We used the street name as the place type to get back a list of all the intersections associated with that particular street.  We need the service to be able to return all intersections for a specific cross street that is input and also want to be able to get variations of streets with pre-directionals.

In our Landmarks data we have a field called PlaceType that we use a category. In order to get complete lists of all directions (say E Temple St and W Temple St) in the Category field on the service we enter "POI, Point Address, Street Address" so that it only searches for particular roles on the locator to limit some of the results.

The issue we are having is that we are getting an error saying 'Unable to complete operation invalid map<K, T> key' when entering a few streets into the service (example below: Jackson St, Los Angeles). In this example, we are expecting to see a list of intersections from our POI role but instead, we are seeing no results at all. We have a few other instances of this that have been brought to our attention as well: Jackson St, Center St, Turner St. Although these are not working as planned, there are other inputs that are giving desired results even though the input is the same and the data is formatted the same (Example; Temple St, Los Angeles).

Would anyone happen to be able to shed some light on map keys or advise how we can resolve the inconsistency of this issue? 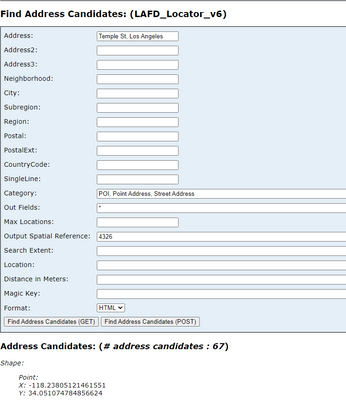 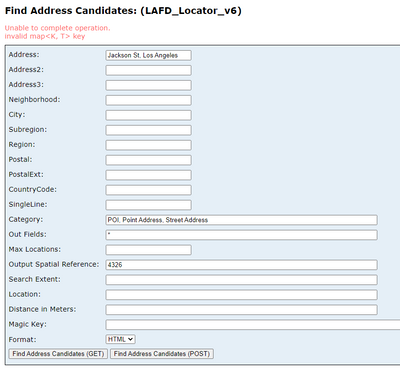 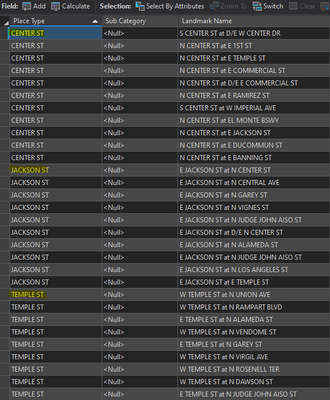 1. Do you not get expected results for in intersection addresses when using the StreetAddress role locator or if the POI role is not included in your multirole locator? Using POI role for intersection points means  you would miss out on searching for different types of intersections as described in https://pro.arcgis.com/en/pro-app/2.8/help/data/geocoding/fundamentals-of-intersection-geocoding.htm.

2. Are the streets that participate in the intersection entered in the same order when trying to find the intersection? If not, then the POI approach would not return a match.

3. Do you get different results if you used the SingleLine parameter for ' Jackson St, Los Angeles' instead of Address for the input?

4. Does this error if the locator does not include the POI role?