Is ArcGIS Pro too complex for my needs?

I am hoping to get some help determining if I can accomplish what my company needs using ArcGIS Pro. I like the download map and use offline functionality. I have spent a great deal of time researching and testing, but I keep running in to scenarios where the requirements go beyond my resources. I will try to explain:

We have a set of shape files from a custom app that ran on Pocket PC. It contains a network of roads that we have been building and maintaining. The roads are mostly dirt roads. I have been able to import the shp files into a project as layers and then added them as feature classes. Here is a snip of what the roads look like. 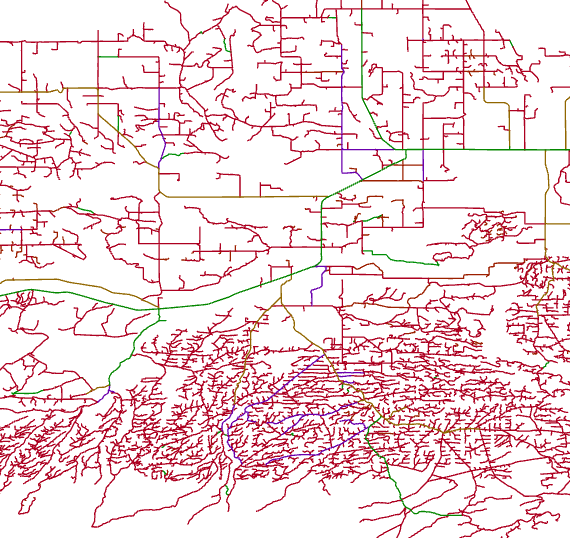 The colors are the different shape files and each represents a speed limit which has been used when the previous app decides a route. What we want to do is specify a point using GPS coordinates and generate a route from the current location to the specified point following the roads on our map. We ONLY want to use the roads we define. Our trucks are restricted from certain roads. The navigation then tracks along that route, recalculating if needed. Turn by turn navigation and other bells and whistles are not needed. We just need to be guided along the path. Real simple requirements.

I imported all the possible point locations with their name and coordinates from a spreadsheet  and added them as a layer. Then I built a mobile map with no errors and added it to the organization. When I run ArcGis Navigator, the map never shows up. All the other default maps show under the add button, but not mine.

I read that I needed an address locator so I created one using the locations table and rebuilt the mobile package. Still nothing shows in Navigator. I tried to create a Travel Mode, but it says I need a Network Dataset which I can't make any sense of at all. The tool seems to be missing. All the while things seem to be getting more complicated then possibly they need to be.

Can anyone offer some direction? Possibly some high level steps on I would like to know if I can be successful or if I need to look elsewhere.

Michael - here is an exercise that lays out the steps to set up a basemap that will work with Navigator: Make a map with all your own data—Navigator for ArcGIS | ArcGIS

A critical statement in that exercise is "The ParisMultimodal_ND layer is your complete transportation network dataset, with your road data as well as the logic involved in generating routes. All the basemap data is contained in a single geodatabase—this is required when making basemaps for Navigator."

Basically, we need to have a network dataset which is the data model that allows the software to route from one location to another using the logic you choose (shortest path, fastest path, or minimizing other cost attributes that you build into the dataset).  So the key will be to create a network dataset first.

See What is a network dataset?—Help | ArcGIS Desktop and the related help.

That is the general overview.  For now, I wanted to assure you that:

1. Yes, you can be successful but you will need to have a network dataset built from your own road data.

2. I'm checking internally here with a subject matter expert to see what the best workflow will be.  Hopefully I'll have a response today and we can help you move forward with the workflow.

Adding on to Kory's note, here is a great series of tutorials on how to prepare your data for a network dataset: How To: Prepare data for use with the Network Analyst extension

There are several chapters in it and it covers everything from fixing basic geometry issues to setting up attributes for restrictions to modifying the global turn delay evaluator to customize your network dataset. I hope it helps!

do you have the time, inclination or abilities to learn how to use the software

Some of your queries are going to involve a fair amount of investment in time to understand the concepts since they go beyond making a map.  Then there is the money issue... and the 'how many times' issue.  These need to be weighted prior to any investment in time, or money.