huge amount of .geodatabase files since ArcGIS Pro 2.7, not clearing

I have a huge amount (almost 40,000, 200GB) of *.geodatabase files. These are not clearing when ArcGIS Pro shuts down or when I turn off/restart my PC. I haven't noticed my internal drive fill up so quickly before, but realised my storage space depleting after installing the 2.7 update to Pro last week.

All the .geodatabase files have been created in the last week (since the 9th Jan 2021 all the way up until today, when I haven't even opened Pro!) and are anywhere between 200KB or so, to 62mb in size each.

Watching the folder now, I can see the odd .geodatabase-journal and .geodatabase-conch files pop up and disappear momentarily, and I'm not even running Pro when I see this (the only Arc related process running is ArcGISIndexingServer). Seems like these files are mobile geodatabase (new since Pro 2.7) SQLite temp files.

What are the .geodatabase files though? Are they specific to the 2.7 update? Why are they clogging my machine and not being removed automatically after sessions? Can I manually delete them safely? Will they just come back after anyway? It must be a bug of sorts. 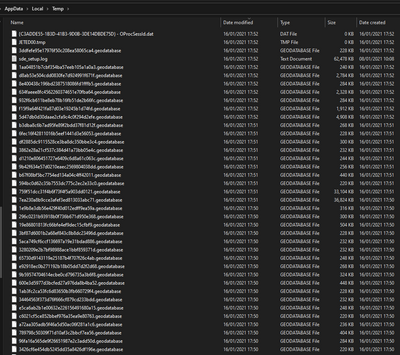 I have none of that garbage.  Check you windows settings as well for cleaning out temporary files.

t [install drive]:\Users\<username>\AppData\Local\ESRI\Local is for your local cache and you can clear those out from the Project tab, Options Display.  I don't think those are display related.

Are working data not locally stored?  That may be an issue, if you can narrow down the origin

Please see my latest posts in this thread. When I force quit the process 'ExcelToSQLLite64', the .geodatabase files stop appearing in my temp folder.

Actually, I think you already answered most of the questions yourself...

As you state, the .geodatabase files are ESRI's new Mobile Geodatabases based on SQLite that ESRI introduced at 2.7.

I have seen similarly uniquely numbered files in TEMP in older releases, and these are likely related to some form of local caches, either for imagery or vector (tile) based services you are using in one of your projects, or alternatively, as you stated, the ArcGIS Indexing Service may be involved in the creation of these, although I doubt it would create this much of crud.

I guess ESRI substituted some other file based caches for the new format.

Of course, if these caches do eat up your entire drive, I think it is time to report this to ESRI as a potential bug. That shouldn't happen.

Anything in TEMP is by definition "scratch", and can be safely removed. If not, it is a bug in the software. Do note though, that some of these files may still be in use and locked, e.g. by the Indexing Service or whatever is using them, and thus not removable.

I've raised this as an official support case. Will report back on the progress there. But yes it must be a bug, as 200GB of temp files not clearing is certainly not an intentional process from ESRI.

I'm not sure if it was related but 'some time' over the last 7 days I was pulling in a few layers from the ArcGIS Portal, in the catalog pane in Pro. A few of the layers weren't loading and errored out. But maybe this set off a snow ball of endless caching...

a process from the ArcGIS 'bin' folder called 'ExcelToSQLLite64.exe' is running in the background using 6% CPU and almost 500MB of RAM when I don't even have Pro open. I haven't opened it all day.

This screenshot is from today, where multiple .geodatabase files are still being created within seconds of each other (see red circle in middle of screen). Further clogging up my hard drive.

You are not by any chance an ESRI "Production Mapping" or "Defense Mapping" user? I have never used these products myself, but recently noticed in the documentation Help pages that some of the cartographic product specifications for these extensions are defined in Excel and used as input for tools. Maybe this process is related...

No. Just a simple Basic Licence for ArcGIS Pro. No extensions or extra modules installed.

Did you stop it and see what happens?  Does it affect Pro?