Hello. I am working with various gdb line and point feature classes but struggling with the projection and having these layers align with one another on the map.I was wondering if anyone could assist me with this issue.

OpenStreetMap data (blue line) was previously extracted a few years ago and are aligned with the road intersections shown in green. These are in the NAD 1983 (2011) San Francisco CS13 projection. However, I have a recently extracted OSM intersections layer (in yellow) that do not align with the lines or the existing points. I also have a local city layer (purple) that also do not align. All of these layers are projected with the same San Francisco projection.

Is there something I'm doing wrong? I'm using the "Project" tool as well as setting the coordinate system for the dataframe. I also created a new geodatabase to house the two unaligned point feature classes in case the issue was with the gdb coordinate system. I am totally confused! Any thoughts are appreciated, thank you.

Edit: I should note that the OSM data I extracted with the intersections (in yellow) align with one another, with the same SF projection. But I can't seem to understand why the two pairs are not aligned. The city points (purple) is not aligned with either. (See second photo below). 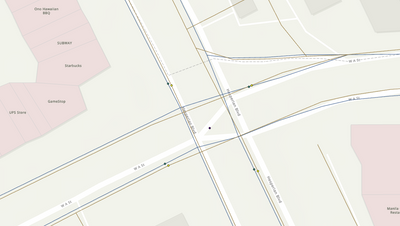 Do you have other transformations available to you?

Hi, that's what I've just started looking into. I've been using the default WGS_1984_(ITRF08)_To_NAD_1983_2011 but it also shows 8 others. A mix of transformations involving other acronyms such as ITRF, HARN, CORS, NSRS, etc. How do I go about selecting the correct one?

Unfortunately don't have any knowledge of US projections, hopefully someone here can give you specialist advice on that.

You could of-course trial-and-error the transformations quite quickly by going into the Map properties and selecting the on-the-fly transformation in-turn until you get something you like.

Thank you for your help! I tried all the transformations and two of them worked, actually! But only for the line network. I'm trying to project and transform the city intersections but none of them seem to line up. Do you have any idea why this might be the case?