Extracting Features from Raster by Color

I have an image of a U.S. map, divided into sales territories, which are color-coded. Is there a way in ArcGIS to extract the different features by color? It looks something like this.

I'd like to export all the features (different sales territories) into a shapefile. Any easy way to do this?

The image looks like it was generated from vector data. Can you ask whomever created the image if they're willing to share the vector data with you? That would certainly be easier.

That said, you can get an image into a polygon layer, which you could export as a shapefile. The main tool you'll need is Raster to Polygon. To actually get the values out of the raster, though, you'll need to georeference the image, and will certainly need to do some pre-processing.

For instance, if you're actually trying to pull the data from something like the image you posted, all the highways and labels are going to show up as separate features, as well as all those "textured" areas from the topographic basemap. 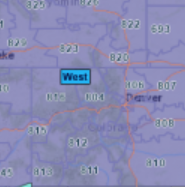 Working with a raster will go pixel by pixel, and without some serious cleaning of the image, you're not going to get anything that useful out of it.

Alternatively, you might try georeferencing the image and just tracing it as best you can. The territories all look like they follow state and hydro boundaries, so if you brought some of those layers into your workspace (say, from the Living Atlas), I think you could easily recreate these polygons in less time than it would take to sufficiently clean up that image.