I'm doing a project in ArcGIS Pro where polygons are incredibly important to separate data from one another. We run a tool that draws the polygons themselves, and then finds errors where overlaps happened. Part of what I'm doing is cleaning up those overlaps to run the tool again until its clean. In order to fix them, I just have to grab the polygon, edit vertices and reroute a few things where they arent touching.

Easy, right? Well it was. I'm not sure what happened, but now every time I edit vertices on a polygon and let it process, it moves the entire polygon a good bit. In doing so it excludes data that needs to be in there by bumping it out of the polygon, and causes more overlaps. I didnt catch it at first because it wasnt doing it for a few days. But when i made fixes, it created a whole slew of other issues. I'm now seeing it, and have to snap to a reference point, and use the move tool to move the entire polygon back to its original position. This obviously is not ideal.

@JacobWagner Is Stretch Proportionately turned on? Check in the toolbar that opens on the map when you are editing vertices: 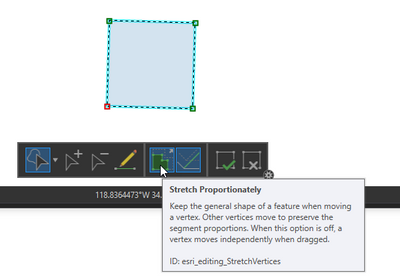 You can also toggle it from Options > Editing > Geometry: 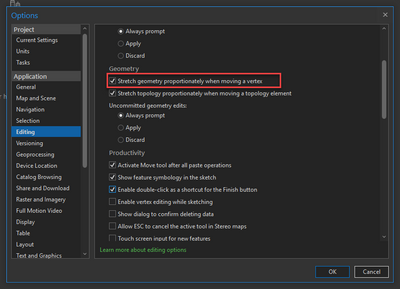 "Stretch geometry proportionately when moving a vertex" is not on, however the topology one is on.

I just toggled both on, both off, and one and not the other and none of them help with what's going on. Its not when I'm moving the vertex, its after I move it to where i want it, when the change happens it moves exactly how i want it, then the entire polygon remains intact but shifts several feet (in this scale its a small amount, but these are tight polygons and have to be).

@JacobWagner hmm... I'm trying to picture it but having a hard time. Did you contact Esri Technical Support yet? https://support.esri.com/en/contact-tech-support

Please contact them and show them the issue. A few things you can look into that Support can assist with: