I created metadata when I made a shapefile using ArcGIS. I saved the shapefile to my computer.  I want to edit that metadata in ArcPro, but I get a message saying it is Read Only.  How do I change this?

My overall goal is to edit that metadata and then have it connected to the layer when I upload it into AGOL, but I understand ArcGIS will not do that so I need to go through Pro. Correct me if I am wrong. Thank you.

How did you create the shapefile's metadata? Do you mean the metadata you have shows up under the "FGDC Metadata (read-only)" heading in the ArcMap/ArcCatalog metadata display, and the Upgrade button is available in the Description tab? That content is not visible in ArcGIS Pro at all. 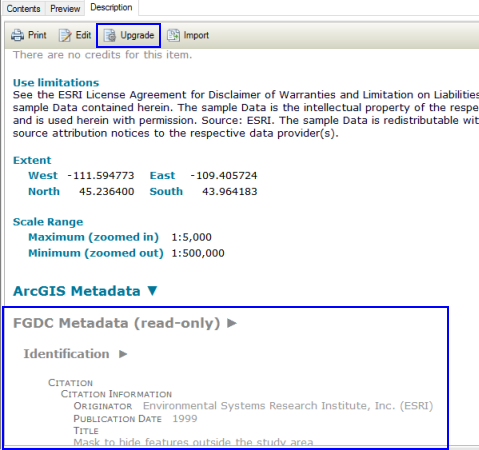 The ArcGIS platform, including ArcMap/ArcCatalog, ArcGIS Pro and ArcGIS Online, requires metadata content to be stored with the data in the ArcGIS metadata format. That means you will have to "Upgrade" the CSDGM XML format metadata content that you have to the ArcGIS metadata XML format in either ArcMap/ArcCatalog or ArcGIS Pro before you can publish it with your data to ArcGIS Online. The same is true regardless of which application you use to publish your data.

I noticed that when I right-click on a layer in the Contents pane and try to edit metadata I get a read-only error, but if I try it in the Catalog pane I can open the Metadata Editor.

Hi Richard, it's actually the designed behavior. The layer metadata is populated from the feature class metadata and is read-only by default to keep them in synch. If you want to edit the layer metadata independently of its source metadata, open the layer properties, click the Metadata tab on the left side of the Layer Properties dialog box, and change the drop-down setting at the top to Layer has its own metadata.

I am trying to create a new metadata object, push it into the layer's metadata, and then publish it to ArcGIS Online with that metadata intact.  I don't want to attach the metadata to the feature class in the gdb, because I have different layers with the same data source, but each with different metadata, to be published as AGOL hosted feature layers.

I see where to do this in the Pro interface, as you indicate, but cannot find a reference on how to do it in python/arcpy.