Can I create a discrete voxel model from isosurfaces?

I have a seabed ground model model provided by a geophys team using Petrel software. The model has been provided as a spreadsheet of gridded points representing 21 surfaces of soil units from -51m to -121m below LAT.

I can make a Voxel model from this data by

3) GA layer to NetCDF to create the Voxel layer.

However, all the workflows i've seen tend to either make a continuous dataset, or interpolate in such a way that makes importing the voxel layer as discrete values not reflect the data I can see in the original petrel data (surfaces). It appears the interpolation has shifted the discrete value horizons/surfaces.

Is there a better way of building up a voxel model from isosurfaces, such that the surfaces themselves retain their Z accuracy, and the data (cubes) between surfaces is discrete and matches the surface value up to the next surface?

Screenshot: difficult to see, but the point features for each service are currently intersecting my voxel model in the middle of each block of discrete data in the model. Whereas, I'm trying to get each volume of discrete data to coincide with the point surfaces. 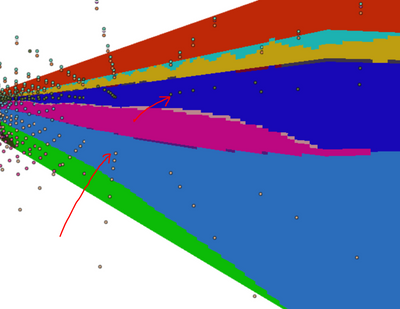