Sure, yes, this deserves a Powerpoint or something similar, but just bear with me.

From the Beginning of ArcView until now:  Why oh why do we look at a column in the Identify Window that NEVER is filled up?    (See attachment).   And where oh where is there a way to have the OPTION of using the second column?

Part of the idea I have is that if a user has an 'exorbitant' amount of fields, why not have the option to indicate how many fields are in Column A and then how many (an equal amount ideally) are in Column B?   Maybe even using the same types of options/choices/etc that we have when we Design a Legend, with the Fields we want?   Look at MS Word and when needing to create a table, the user can specify how many Columns and Rows.   Why not have at the VERY beginning the option to indicate this so that the User can have control of the Identify Interface?

Going further, maybe this isn't the case everywhere, but I would think it would/should make most sense to have the most layer-relevant fields automatically at the very top of the Identify window so that the general public/end user knows exactly what it is they are looking at without having to scroll down to find out what it is?   Pro and Online both have the flaw of using Default Field names and having them in an order that makes little impact on the user when Identifying (ok, I will allow that this may not always be the case but at the same time Default field names shouldn't be allowed in the general public).   The fact that we have to use a teenyweenylittleittybitty juke-box spinner to get to the fields we want to is kinda goofy when in ArcGIS the Identify window was malleable up or down. This also ties into an even bigger issue for users working with MS Excel to edit .dbf or .csv or .xls files which is to have the Order of Fields consistent across platforms and database views or ??   In this sense, the issue of fields having highest priority would be naturally taken care of--something not always achieved when dealing with the Layer Properties.

Even more "holistically", as a GIS specialist who takes any GIS map to heart when I see it in the general public, why not make it a requirement (or something similar) to use Aliases when creating a Legend or in this case, using columns in the Identify window?  Instead of the Default Field names that we know about but the general public or only slightly-informed end user doesn't?

Lastly, another issue that arose recently that goes back to ArcView days is that when the Identify window comes up, is not always in a consistent position or scale in relation to the object being identified itself, especially at varying scales.  This should be rectified through the same type of technique that we use for Label Placement, where we can determine where we want the Identify window to be.

Will provide jpgs or other ?  upon request.

Some of what you're requesting can already be done in ArcGIS Pro pop-ups, which is how features are identified: 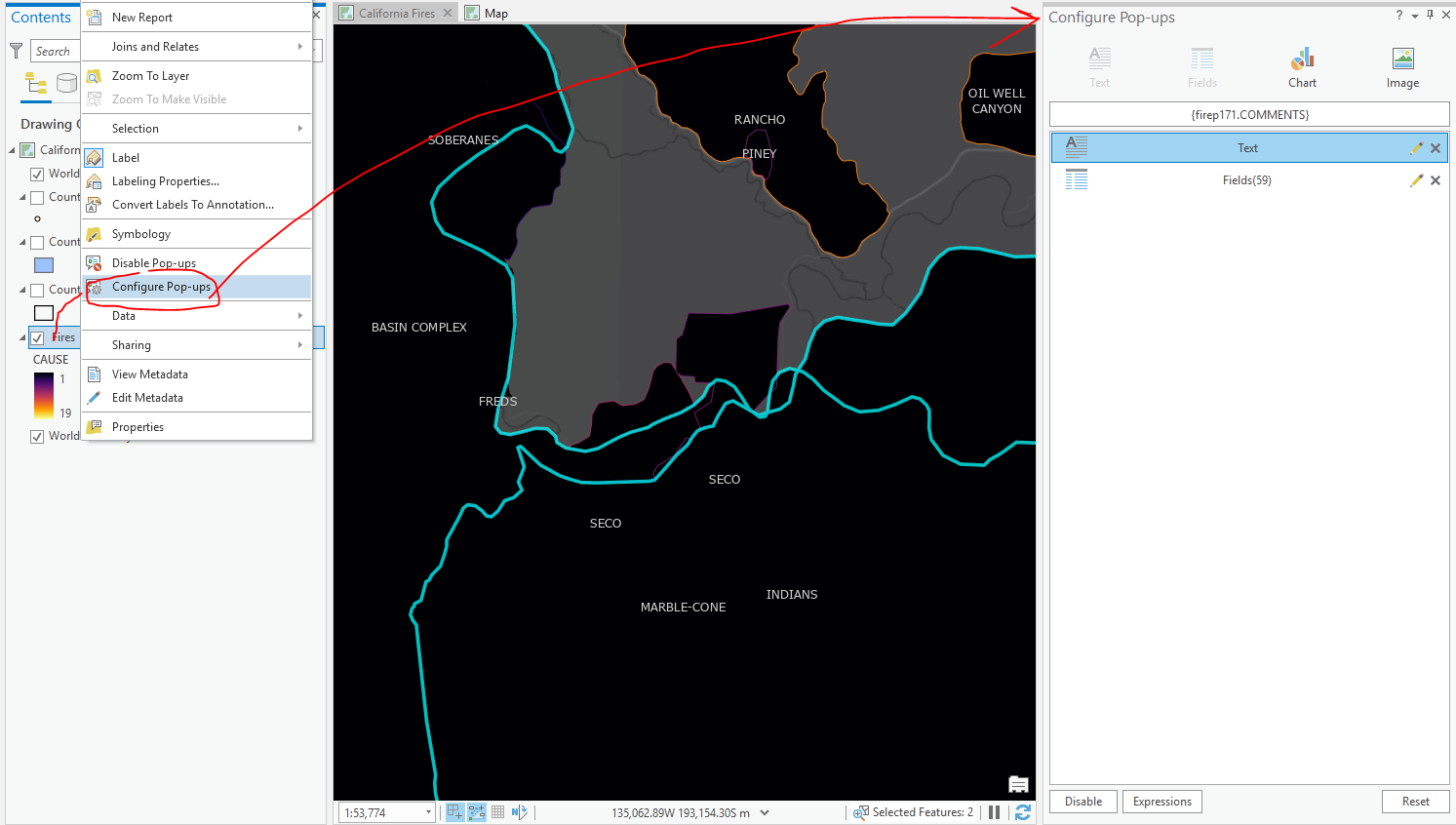 Pop-ups can also be pinned or the pane can be docked so that it stays in the same place regardless of what features you're identifying: https://pro.arcgis.com/en/pro-app/help/mapping/navigation/pop-ups.htm#ESRI_SECTION1_628588AC66254ACA...

And here is the specific section about customizing pop-ups: https://pro.arcgis.com/en/pro-app/help/mapping/navigation/pop-ups.htm#ESRI_SECTION1_90D499092DA944FD...

Thanks for this.  Wished I'd known about this about a month and a half ago....part of the issue was that I had to create labels for my layers based on a pre-existing format from another project's layers but had to start from scratch.  At the same time just through Label properties I was able to intuit a lot of what I needed until it came to the text string format, but was able to solve that too in a non-GIS centric way (I am married to MS Excel =)

But yes this might be clutch on future projects.