Show field level metadata from the attribute table in ArcMap

It would be great if it was possible to right click on a field heading in the attribute table and choose an option to show just the field level metadata for that particular field (if available) from the metadata.  That way if it is unclear what a field heading means or if the data in the field needs explaination and this explaination is held as field level metadata this can be easily and quickly seen without having to open the metadata and scroll wayyy down to the bottom to find it.

by BenStewart
There are a number of suggestions here about metadata, and I think they would all be solved with a simple python library for reading and writing metadata. Have you had any luck with this? Have you investigated it any more?

I had an Idea when creating a new layer for a co-worker who didn't use GIS. I had spoken to them about creating and using GIS data and how adding a spatial element would allow them to interact with their databases and analyse in a new, potentially easier way of managing their data. I delved into the usual speil that all GIS users have undertaken when trying to turn the uninitiated to the cause.

So when explaining the concept of BLOB and raster fields in a feature layer and how you can add documents and images to a feature layer, I showed them how to create this field and I when i was explaining he difference of the field name and the alias to them. They said "so will that show you the type of data to input or guide the user as to what to put into the field? I was a little confused so they tried to explain. "You know like, in excel when you write a comment in a box and the small red triangle appears in the corner and when you hover over the comment it appears with whatever you wrote, can you do that to the field headings to make sure the user only attaches the correct document to the record, or what type of data or input relevant comments into the table, like a way to remind them where data should be coming from or how it should be formatted?

When I stopped to think about it  I think it would be really useful if you could hover over the Field title and if you wanted a little information to help remind you of the data or where it had come from how it was input or where it was from, would be an interesting feature. helping users with limited GIS knowledge who only would be using the software for inputting data in their use of the software.

Unless I'm mistaken I don't believe there is a function like this available in Desktop. that when you run over the field headings you can get a breakdown of the data held in that column?

Andrew Boyd‌ If I understand the request correctly, I believe it is already offered in ArcGIS Pro.  ArcMap tables do not do this, but in ArcGIS Pro, you can hover over field headers and see the field's metadata.  Here I hover over my GridID field and see the following: 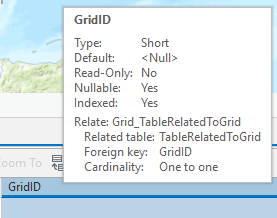 Haven't checked out ArcGIS pro just yet, Its sort of what I meant but not quite, That abit in the technical side it was more along the lines of small comments like "data derived from....(source).." or "contents calculated by adding fields X & Y"

OK, thanks for the clarification.

Yes! metadata and data are too widely separated. Opening up an "item description" takes a long time and when you get there, it's the full record and a separate window. There should be quickly accessed context-menu / hover tips / popups, for example, that describe the field and the data as described in the metadata.