by LorindaGilbert
Occasional Contributor II
Currently in the TOC List by Source tab, it gives the version name from the database and the connection type (which with the advent of ESRI recommending Direct connections makes this somewhat irrelevant now), then under this shows the feature dataset (if applicable) and then the feature class name as it has been changed to in the TOC.

In our case (and likely many others as well) when we change servers for our data, we keep the same data owner, data schemas and database name and just create a copy of the database on the new server.  When changing the data source to the new server (unable to effectively do so with python scripting due to bugs in the extents on layout windows), in this tab, everything looks the same after the change.

So without opening each feature class to check the instance for the data source on the properties source tab, you don't know if you've updated the feature class to the new server or not - MANY CLICKS OF THE MOUSE.  We also have several mxds that are published map services that inadvertently got some feature classes added via the data owner rather than the data viewer to the mxd.  To compound matters more - we use SDE schema and the DEFAULT version in all of our databases AND we use replication from a master editing database.  Therefore, the same feature datasets and feature classes are in the editing database and the data repository.  Only the database name and the data owner are different - but not everyone pays attention to that detail.  Most only know that the editing database is on a different server.

It would be nice to see the server name and the user name connected on the same line as the version name.  The TOC on this tab already sorts based on the database name, server name and user name, it just doesn't show this information. 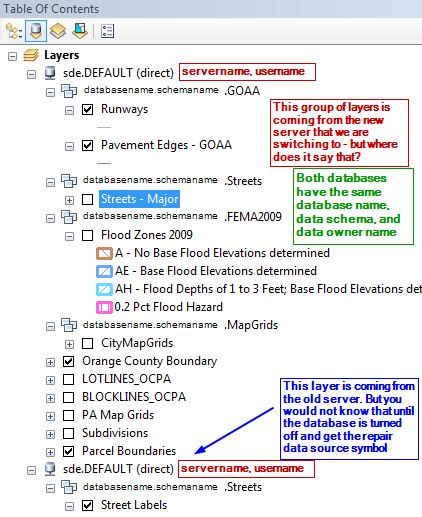