The ability to use graphics within ArcMap gives the user an added level of flexibility.  When creating rectangle utilizing the Drawing Toolbar the user should be able to create rounded edges on the rectangle.  The edges are easily created when grouping a set of objects by accessing the group’s properties, choosing the Frame tab, and entering a rounding value here.

It would be extremely useful to have the ability to create rounded rectangles using the Drawing tools.  An example of how this would be useful: To create a custom legend with many graphic objects and rounded edges is straight-forward.  Place the graphic objects where you would like them, select and group them together, access the properties of the group, choose the Frame tab and enter a rounding value.  However, this process could be much more efficient.  Should you want to change the placement of graphic objects that make up the legend, you must ungroup the graphic objects, which removes the frame.  At this point you must repeat the earlier process to get the rounded edges back on your custom legend.  If you had the ability to create rounded rectangles within the Drawing toolbar, you could easily maneuver the graphic elements around the rounded rectangle you are using for a frame on your legend.  Using a shape created through the drawing tools would allow for much more efficient legend management.

The below image is an example of what the modified Properties window from a rectangle created with the Drawing toolbar could look like. 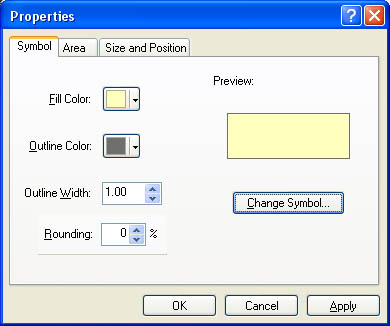 by DavidBarnes
You can do this by inserting a neatline.
Go to the Insert menu in the main menu bar and select Neatline.
The Neatline dialog gives you several options, including creating the neatline as a separate element.

by WilliamChester1
Cartographer, thanks for the tip.

Using the neatline to create rounded rectangles is similar to many things in GIS; there are many ways to accomplish the same task, however, some ways are much more efficient than others.  The neatline method gets the job done, but is a rather clunky way to go about it.

While I didn't mention this in the description of the idea, another solid benefit would be when creating a graphic that is not intended to be the frame of a legend.  An example would be a drainage pond in a new development.  These are typically neither square nor round, but rather a rectangle with rounded edges (at least in planning stages).  Using the neatline here would be a bit of work with the resizing that would have to be done.  Instead, the user could simply draw a rectangle and round the edges using the graphics tools.  But in the meantime, I guess I will have to use the neatline!

by JoshuaDamron
Great tip Cartographer!  It will get me by until ESRI makes the needed improvements.

This is planned for ArcGIS Pro 2.9.

Rounded rectangles, along with a number of others such as arrows, clouds, Xs, etc. are added as graphic elements in ArcGIS Pro 2.9.