Pro Enhancement: Save Maps and Layouts

So I'm getting good feedback on the whole many maps and layouts in a Pro Project, and frankly, is the only "Carrot" I have to get folks to switch over. However, here's what's happening:

User will bring 5,10, 20 maps into a Pro Project, maybe make 5 layouts. These maps come from what were formally separate ArcGIS "Project" folders, none of them having anything to do with each other, but, hey, drinking the Kool Aid, we can now manage these maps in one Project, right? Keep in mind, each one of these "maps" is a map file I had set up and put in these widely distributed folders.

Another user also needs to be looking at the maps that the first user is manipulating. Let's say they have a Project with 13 maps in it, where 10 of those maps are coming from the same legacy folders that User 1 got his maps from.

User 1 told user 2 he saved the project, and user 2 should now see the updates to those 10 maps. What neither realizes, is that those maps are now part of User 1's Project, and were NOT saved anywhere on a server in 10 different folders.

The explanation of "Well you have to "share" each map was interpreted as "That makes no sense. I saved my project. What's the problem here?".

Would be handy, if, in cat pane or view, there was a right click option on maps and layout to open, instead of add and  open, and an option to save that map as the same file it was opened from. In other words, I'm reading and writing to a mapx file and not bringing it through the aprx pipes and levers.

I'm aware that there is a Share Map and Share Layout Dialogue, and no, Portal is not a solution for this as we do not publish every single feature class we work with as a feature service, and never will.

Adding to this, I feel like I should be able to right click on a mapx in cat view and paste it to any folder as well, not just a project folder (which I can't do). Not can I drag a mapx file to another folder.....

In ArcGIS Pro, you can indeed open a .mapx file, work on the map, and then save the map back to the same file – when you save a map to a map file (https://pro.arcgis.com/en/pro-app/latest/help/sharing/overview/save-a-map-file.htm), if you select the existing map file in the Save Map As MAPX File browse dialog, you will be prompted about overwriting the existing file, and if you say Yes, you will be saving the modified map back to the original .mapx file.  (Same with layout .pagx files, through the Save Layout As PAGX File browse dialog.)

Note that this can be saved directly from the map's context menu without going to the Share tab > Save As group. 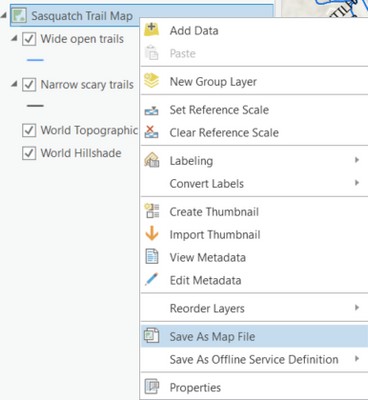 You also mentioned wanting to make copies of map files in ArcGIS Pro.  This functionality is also already implemented in ArcGIS Pro – see https://pro.arcgis.com/en/pro-app/latest/help/projects/copy-and-paste-project-items.htm - the map files would be included in "File-based items stored in a folder".