Extend the Page Definition Query to other fields

This could be added to the current Page Definition Query dialog. 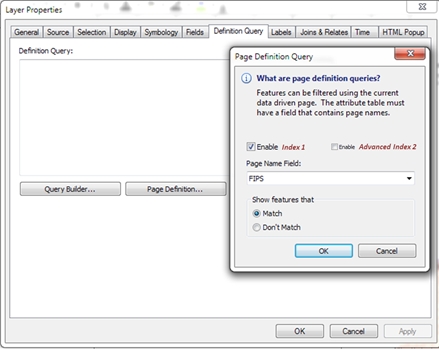 For Example: In a DDP of states, one could add special symbology for  "region of states" in addition to controlling the symbology of the state in focus.

In the Reference Data Frame, the extent could be set to the state in focus with the entire "region of states" to which it belongs.

This is one function that was developed in the Customized DS Mapbook (an extension of the 9.3 Mapbook developer sample) which didn't make into our current DDP. Further information on this and other versions of the Mapbook developer's sample can be found at https://sites.google.com/site/arcmapbook/ .

An implementation of this idea using Python script is available at http://forums.arcgis.com/threads/53404-Looping-through-a-definition-query-in-data-driven-pages?p=336...

by DavidWhiterod
Jerry, a came to this site this morning to add the same idea/request!

Instead of having a two indexes, I think making the 'page name' into a drop down box that lists all items in the extents layer would be good.e.g in your example, The extent layer could have items that list the state and its region. Then each layer would be able to have it's own definition query.

As it looks like MPS Atlas is being depricated, this simple change would make data drive pages for of a viable alternative.

This is an essential funcionality, having only one atribute is too simple.

I'd love to see this also. There is a partial workaround I find myself doing: add extra fields to all the relevant data that match the page name map series fields and use those fields to attempt to control visibility. Besides creating This isn't always possible though depending on the complexity of how and what visibility and symbology I'm attempting to control, it only works for simple situations. I'm using Pro and if Pro has a solution I haven't found it yet.