It would be great to see a dynamic scale bar available for data view.  This would allow for users to estimate distance accurately as the scale changes, rather than having to use the measure tool or toggle between layout and data view.  Picture below to illustrate. 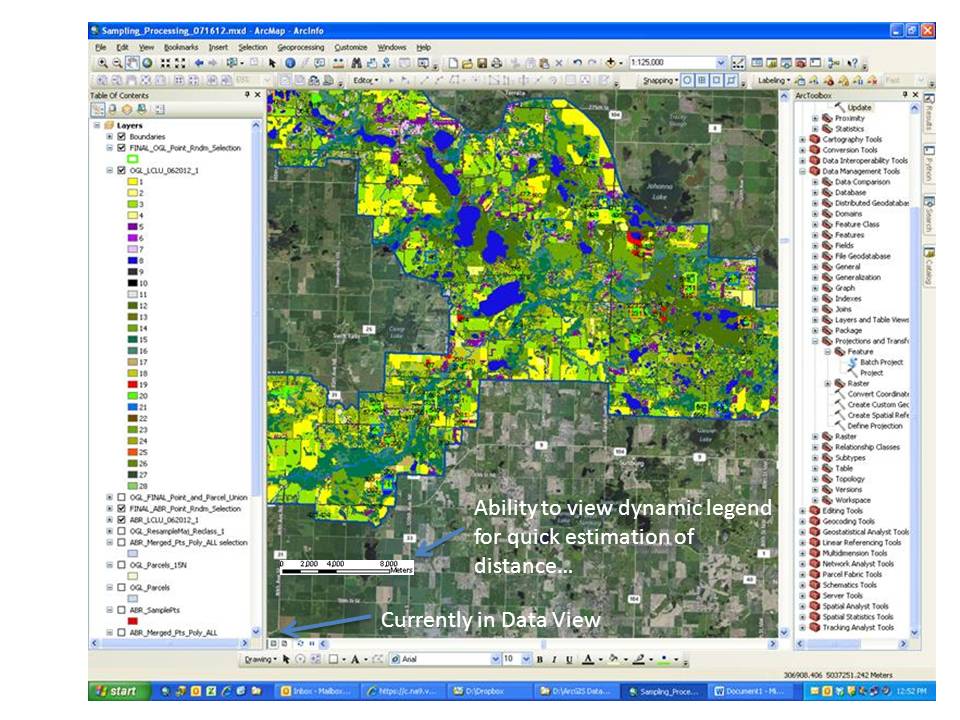 by MaxRingler
Please! This is a much needed feature for me! QGIS has it since ages...

this feature is a long time coming.  Many years ago I work on other software that had a graticule (cursor) that was adjustable as a box, circle or bar that you could set the units for and then it adjusted as you panned and zoomed throughout your work area.  very good for quick estimates of distance and area.  I believe it even let you adjust to a grid function that could be set to acres for example in a 5x5 or 10x10 format to do quick evaluations of areas.  would be a much faster and useful tool than having to start up the "measure" function" and bounce back and forth from your cursor.

This would be good. And on this note, a variable scale bar for use with global maps where the scale bar is not accurate across the whole map (something many are not aware of... Does every map need a north arrow and scale bar? Choosing the best way to indicate map scale   ) (is there a way to do this?)

Seriously...7 years from now and still this is not possible?

Does anyone know about 3rd-party plugins, that can offer this functionality?

Esri has written some of the best articles explaining this concept. However I am not aware of any implementation 3rd party or otherwise. Hopefully they can implement it in Pro, JS API 4.x and next-gen AGOL in the future.

Indeed Max yes bearing measurement for azimuths would be nice in the basic measure tool in Desktop, for quick measurement, it would be faster than using the GP tool.

Glad to see this getting some traffic again.  I'm not a programmer, just a user, but as noted previously having used similarly described tools such as these in other software packages in early 90's it would seem to be a viable option.

Boxes, bullseye's, scale bars and protractor like cursors that had variable scale/unit settings would be very useful on a daily basis.  Uses in collection, editing, analysis on spatial data and imagery are some things I can visualize.  The "measure" tool is just not friendly or quick enough when scanning though large amount of information and needing quick estimates of values.

Kevin, I would be interested in reading some of the ESRI concept articles you mentioned if you could put links here it would be appreciated.  I also know of no 3rd party tools free or fee that have these functions.  Would be happy to be

illuminated if anyone does.

It only took the creation of ArcPro for them to implement a way to turn off the "double-click" to finish a feature while digitizing.  I am with you, how can this possibly take so long??