In catalog be able to duplicate a layout.  So add a duplicate item in the right button menu to do so.  Now you can only copy and paste.  The problem is that it's also duplicate the maps.

We just need a copy of the layout with all layout elements being the same, same map it's pointing to, scale, etc..

For now very time consuming to change everything and delete these unwanted maps.

I agree. Sometimes I want to to keep my layout more or less the same between maps, and a map series isn't always viable.

Thank you for submitting this idea @MarcelSt-Germain

While providing a Duplicate command is something that the development team already has in the backlog (meaning we could probably move this idea to the Under Consideration status) there are pieces of your description that are concerning.

"The problem is that it's also duplicate the maps."  Can you provide more details about this point?  If you copy/paste a layout in the Catalog pane, you should just get a duplicated layout, not duplicate maps. 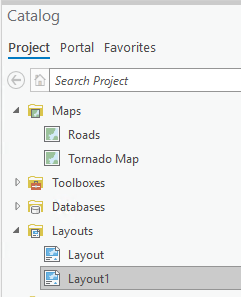 For example, I had one layout called "Layout" and 2 maps in my project.  The layout uses both maps.  When I copy/paste the layout, I get "Layout1".  My maps are not duplicated.  So we need you to clarify what you're describing.

Because of the question above, this statement is out of context for us: "For now very time consuming to change everything and delete these unwanted maps."

The behaviour he's describing is consistent with my experience, too. (ArcGIS Pro 2.7.0)

Not sure what makes it happen, other than it only seems to happen on projects that have a lot of stuff going on. When I tried to replicate it in a new project, nothing happened, but it happens on the last two major projects I have.

Although it this clearly isn't intended behaviour, you end up having to work around by creating a blank layout and copy-pasting all your elements except the data frame into it.

Thanks for the additional details @AlfredBaldenweck

Like you said, that clearly isn't intended behavior.  So what I'd say about the unwanted duplicate maps part of the conversation is that you should update to ArcGIS Pro 2.8.3 (if possible) which is the current version of the software at this time.  If you still experience that behavior, a bug would need to be logged with technical support.

As for the idea of Duplicate layout, that is Under Consideration.

That's exactly the way Pro handle copy / paste a layout in Alfred post.  The pasted layout also pastes a copy of the map. That's the problem.

Hope to see this in future update.

Hi @MarcelSt-Germain I hope that you understood from my last post that what you and Alfred are seeing is not expected and would be considered a bug.  I am not seeing that behavior when testing on 2.8.3 and daily builds of 2.9.  This idea is about providing duplicate capability (in addition to the existing copy/paste). The issue that you're reporting about Maps in the project being unexpectedly copied will need to be addressed separately (i.e. investigated through technical support if you are already on 2.8.3 and still experiencing the behavior).

Did anything ever come from this?

I will also add the note, even in 2.9.3 I notice that when I copy layouts I sometimes get a copy of the associated map as well with a “1” after it. I know this is “unexpected behavior”, but behavior I actually very much like. Just wish I could make it happen every time. Just a guess, but I think it copies the map when the associated layout has only 1 map. My latest project has 3 map frames and the maps haven’t duplicated after copy-pasting the layout. However every project I have had before this one in the last 6 months has only has 1 map frame/1 map per layout and have noticed the duplication every time. If 3.0 comes out and this “bug” is fixed, I’m going to be sad.

Unless 3.0 adds layer states on maps for layouts, then I’ll be SUPER happy and won’t care about needing copies of maps. I hate having to have 8 copies of the same map just so each layout can have a single layer turned on or off difference between them! Is there an idea posted for this? I need to do some searching but thought I’d ask if one of you knew.

Sorry, I forgot to reply to this.

It's an issue with in-memory raster layers, e.g. Hillshades, created through Raster Functions.

I was hoping it'd be taken care of by now.

BUG-000144332 - Maps containing in-memory layers are copied when layouts are copied and pasted.

Workaround: Export the output raster into a mosaic dataset.

So their "implementation" is to not fix the issue, but tell you to export your raster function into a mosaic dataset? Huh. Well like I said I like that it duplicates the map when I copy a layout, so I guess I just need to keep a raster function in every map I have!