Solution:
A technique or procedure that allows the an administrator to define the default Folder Connections

Scenario:
Let’s say that there is a .mxd stored on a network drive. Many new ArcGIS users must install ArcGIS Desktop and access the shared .mxd.  The only problem is that when they open ArcMap or ArcCatalog all of the folder connections are empty by default. Each new user must manually create their own folder connections and confirm that they have been set up correctly. This wastes time for the user and the ArcGIS admin communicating back and forth where the resources are located and how to map the folder connection.

Benefit:
Everyone could save time if the Folder Connections were 'pre-populated' by the ArcGIS admin. Using the scenario from above, all the new ArcGIS users would have to do is install ArcGIS Desktop and start working.

Suggested techniques:
1. A installation switch could be added as one of the acceptable commands that allows the admin to define the default folder connections
2. A Back-up/Restore or Export/Import feature that allows the ArcGIS admin to Export his Folder Connections to a file and the users Import into their ArcDesktop
3. Store the folder connections in the registry, allowing a System Admin to create a registry installation script
Tags (2)
Share
7 Kudos
3 Comments

by MRLocator
This is what I would like my users to see when they install ArcGIS Desktop: 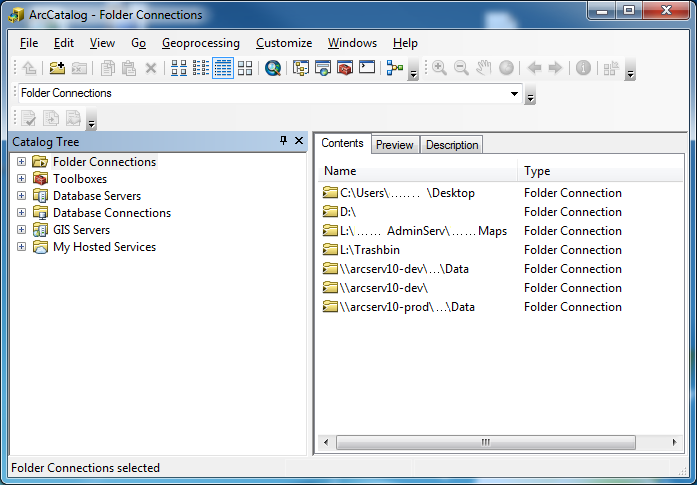 On our network, users connect to a central server to use ArcGIS, so ArcGIS isn't newly installed for each user, but each server user running ArcGIS for the first time would normally get an empty list of folder connections.

In older versions of Windows, we used to manage this by copying the Esri user profile from a user who had folder connections set up in the desired way to the "Default" user profile. The key file was ArcCatalog.gx, which resided in %APPDATA%\Esri\DesktopN.N\ArcCatalog. Users starting ArcGIS for the first time would have the default user profile copied to their own user profile automatically by Windows. Unfortunately, later versions of Windows (8, 2012, 10, 2016) don't use the default user profile anymore. I'm at a loss as to how to accomplish my task under these newer versions, but this idea could help in both the shared server case and the separate installations case.