Auto-apply edits immediately while editing in the attribute pane

The original idea has been changed to refer to making the 'auto apply' box in the attribute pane checked by default, and applying edits immediately without an information box appearing and it taking several seconds to apply an edit in the attribute pane before moving to another feature to edit.

Currently when editing multiple features from the same feature class I get prompted to commit edits when I switch between features.  E.g. for land parcel data I populate an ID for one, then move to the next to to the same but get interrupted by a commit prompt.  This is a very conservative way to ensure that edits are saved, but also interrupts workflow too much.  In ArcMap any number of edits could be performed before saving.  If committing/saving edits in Pro could be tweaked to interrupt less and allow more work to be done between edits this would be great.

When transitioning out of e.g. an attribute window or (if it is added) actively closing an edit session, those could be logical points to prompt for a save.  Right now it is too frequent.

This behavior doesn't sound right.  You shouldn't get prompted after every edit.

How are your editing options set up? 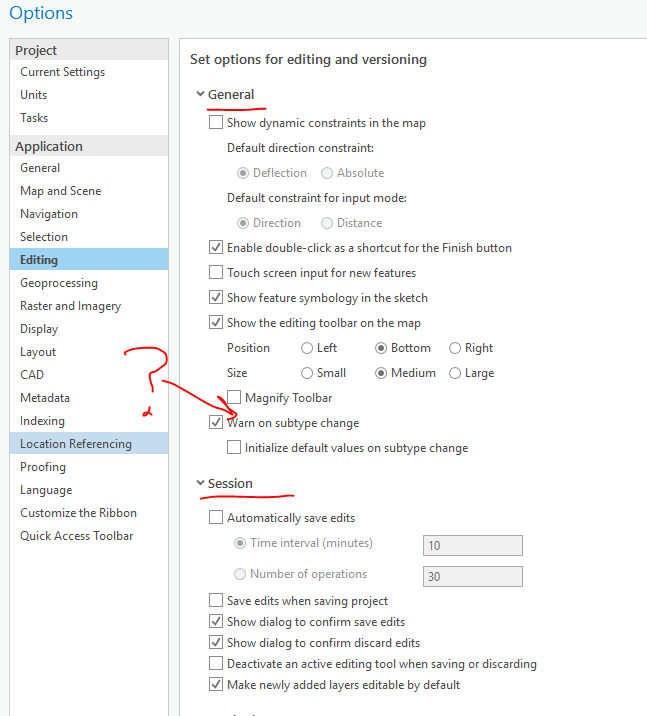 Also, editing operations are already part of the Undo stack. 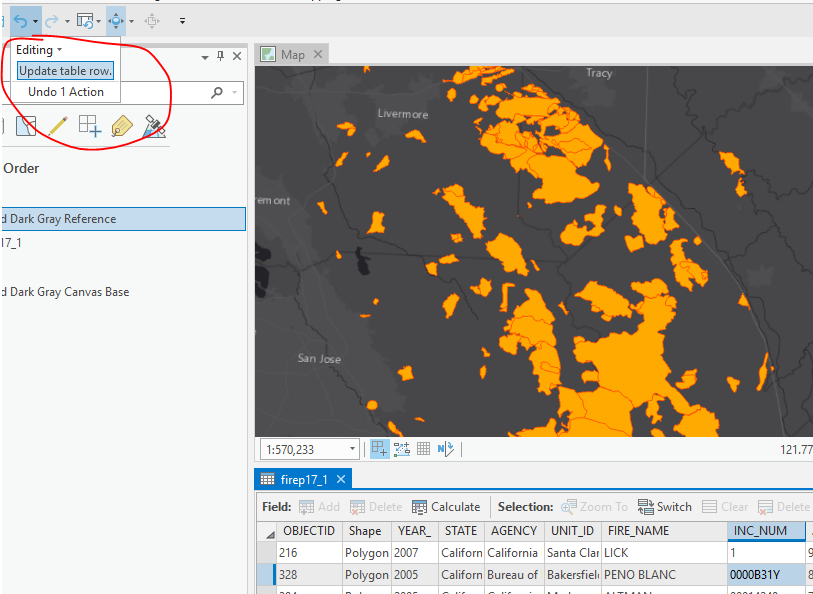 I can edit without getting prompted after each one.  The only thing I can think is that the field you're editing is a subtype?

We don't use subtypes, it's a free text field.  When I have two records selected from the same feature class and want to edit the same attribute for both (to different values) I get the prompt when moving from one feature to the other.  This did not happen for the same feature class in ArcMap.  There are other occasions when I can perform a number of edits without saving, but this one is one of those small but slightly irritating flow-stoppers.

Anything on the undo button idea?  It must have been suggested long ago, or am I missing where you can do that.  I don't mean choosing not to save, but actively undoing with the one click i.e. a button.

Chris, I just tried the workflow you're describing in ArcGIS Pro 2.3.3 and do not see the behavior.  As for Undo, I showed that in my last post.  You can also Ctrl+Z to Undo.

I'm going to close this as an Idea as what you're describing is not generic behavior in the application.  If you are experiencing difficulties with the workflow, at this point it might be worth reaching out to Technical Support: https://support.esri.com/en/contact-tech-support

Hi Kory.  I was referring to the attribute window associated with the edit 'toolbar' on the right hand side of the screen (by default), i.e. the one in ArcMap on that toolbar so whatever you call the Pro equivalent - perhaps the 'attribute pane'?  You have it as a tab on the right hand side of your screen shot.  I wasn't referring to the attribute table as opened from the layer-> right click, with which I have no issue editing attributes.  I prefer the 'attribute pane' on the right as it gives a tidier view of attributes and allows easier mass editing of them.  Perhaps I wasn't very clear in my original post.

So I'm not sure the idea/issue has been addressed yet.

See below for a demo of the prompt when the video finishes encoding:

This video is currently being processed. Please try again in a few minutes.
(view in My Videos)

Do you have Auto Apply checked? 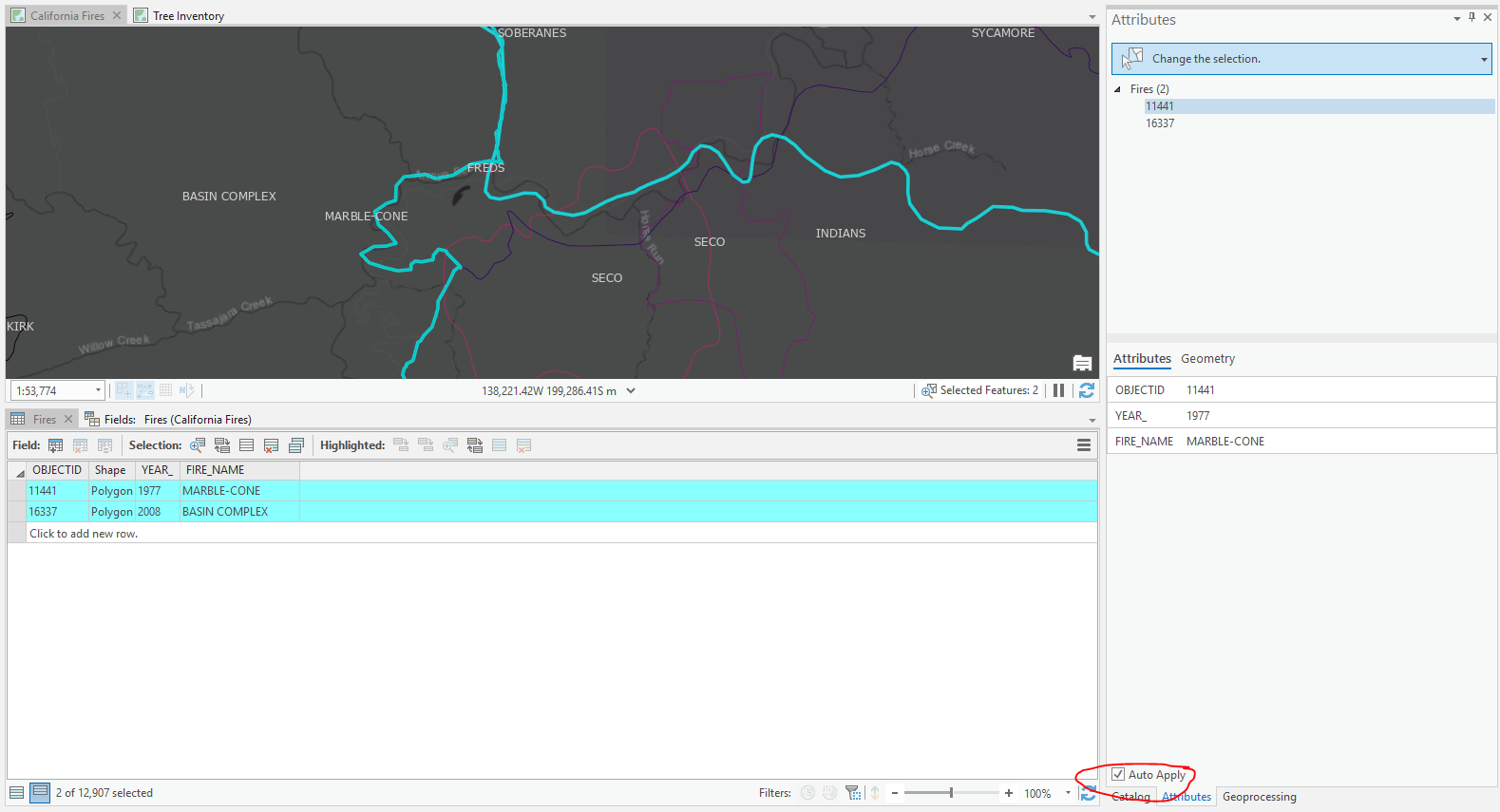 Thanks for that.  I didn't have that checked, no, likely as I haven't seen a need to interact with it previously.  Perhaps that could be enabled as a default, I would suspect that most users would want that.

When checking auto-apply the 'updating feature attribute' info box came up and took several seconds, should applying the attribute change take that long?  Ideally, as with ArcMap, I'd like to apply the edit immediately and move on quickly to the next feature.  The attribute table is an option for this as a workaround, but previously the attribute pane was the better way to go as I've mentioned.  So I guess I would suggest that the idea is now two-fold: