It made editing so much easier when one didn't have to press a secondary thing such as Ctrl-PgUp which is what I have to do now in ArcGIS Pro due to these single key presses being locked to a default that can't be changed in the "Customize the Ribbon" Option.  Currently right now most the F-keys aren't useful now and neither are any of the other keys mentioned as a single click for me which I feel is a waste for some of us that edit so much and want to have less key presses.

Another thing is it would be nice to have a crosswalk of ArcMap names to ArcGIS Pro names for features.  Things such as "Flip" is now "Reverse" and other thing are not that easy to find (if they even exist anymore).

We should also be allowed to enable and disable snapping as a toggle rather than as hold down key press of the space bar each time.

It would also be great to have panes be able to be toggled on and off by a keybind (accelerator) as well.  Currently those such as the "Create Pane" can be turned on by adding an accelerator, but can't be toggled off using the same keypress.

I can understand the actual letters might have to be locked as they were in ArcMap and that's fine.  I just want the same functionality that ArcMap had when customizing keybinds...

I would love for Pro to expand the functionality of their keybinds to much like how ArcMap had them.  I wrote about this back in 2019 when first using Pro in the general forums as I was thinking I was missing something or it was a bug, but it appears it's not actually a bug (since it's still the case).

To sum it up, it seems Pro has hard locked many of the keys that once could be customized by keybinds in ArcMap.  Many of the special characters and such, but more importantly the group of the INS, DEL, HOME, END, PG UP and PG DOWN.

Currently 4 of those are hard coded to quick pans left/right or up/down which only makes sense on some keyboards that have those keys in that configuration (2 rows of 3).  Many other keyboards are set up with 3 rows of 2 (INS/Home/PG UP) for example on the top.  So the hard code panning using these keys isn't very useful and would be much better opening them up to personalized customization for any other commands the user wishes instead (in ArcMap) these 6 keys were more my most commonly used tools and made life so much easier.

Other keys such as the "Q" for both Alt/Ctrl and Shift is hard locked, as well as many of the other ones such as ,./ []\ and so on and would be much nicer to just allow these base keys to be keybound as well.

For example I used to use the "." key for LRS and used 2 different functions for it, using the . and <alt>+. ,was easy on the hands, but now I have to use an awkward combination of Alt+. and either <Shift> or <Ctrl> which isn't as natural to use.

Just hoping keybinds at some point can revert back to the power and functionality they had back in ArcMap is all...

@PeteJordan and @DuncanHornby In ArcGIS Pro 3.0, you can use most of the single key accelerators mentioned in the original idea. Current exceptions are keys like Insert, Home, PgUp, Delete, End, PgDn.

Pete, you mentioned those keys specifically. How do you have them set up in ArcMap; i.e. what commands/tools do you use them for?

Duncan, if you have examples, please share as well.

If you're able to update to 3.0 and give the single-key accelerators a try, we'd really appreciate your feedback on how it is working for you and what remaining gaps you find.

@KoryKramer , thanks for tagging me in. Unfortunately I'm not a big user of accelerator/binding keys, I prefer buttons! Or at least a right click > context menu. I rarely use short-cut keys. About the only one I use regularly is the ALT+ click on layer.

I understand that specific workflows can speed up significantly when certain keys are used so I defer to @PeteJordan idea's as it sounds like he has better user case scenarios than I can offer.

@KoryKramer , I'll upgrade to 3.0 now and test it out.  Generally the <PGup, down> keys I had for Zooming in or via the box.  <Insert> was Select by Rectangle and <Home> I believe was Zoom to the whole page, <End> was pan (similar to Pro's explorer).

The single press F-keys were also bound to a lot of things listed here (which I had to convert to <Alt+Fkey> or <CTRL+ Fkey> instead.

Here are the commands that were assigned to the F-keys

Thanks, Pete. Give it a go in 3.0 and let us know how its working for you.

@KoryKramer, I tested it out and glas to see the full functionality of the F-keys are now avaliable.  In addition to the HOME, INS, PGUP,PGDown, etc, the ,. or <> keys are also hard bound to Previous Extent and Next Extent and are also not able to be changed (at least not with my tests).  Which is fine, as I am used to that, but seems to be a good improvement so far,

@KoryKramer, update.  I did find some issues now regarding the use of the <ALT> keys.  For example I have <ALT+L> as "Copy Coordinates and now when using that, it brings up the portal pulldown menu instead now.

To fix it, I had to go back and re-assign the keybind again overwritting the existing one (which was the same "Copy Coordinates") and then it worked.  So at least there's a workaround, but figure I may have to do this now with all <ALT> combined binds.

Alt-D for Clear (Clear selecton of all features) (esri_mapping_clearSelectionButton) doesn't seem to work at all anymore, so I think there are some issues with the <ALT> combinations...

Alt + L looks like it is already assigned and you can overwrite it: 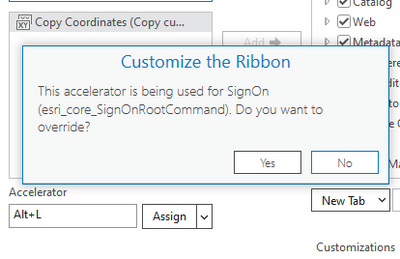 My understanding is that you're saying you had that set, and after updating to 3.0 you had to set it again, correct?

I just set Alt+D for the esri_mapping_clearSelectionButton and it works to clear all selected features in the map. If you have it set to clear a layer selection, the layer would have to be highlighted in the Contents pane for the accelerator to act on it. Can you double-check that? 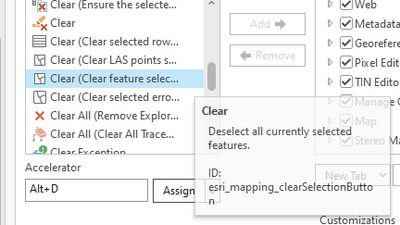 Yes I was able to get the <ALT+D> to work with the clear.

Seems the ID has changed from what it was before as the Clear (Clear selecton of all features) now shows a new ID of Esri_mapping_rasterClearLayerSelectionButton) and that was the reason.  I assume this was actually a fix as it was using the same ID as Clear (Clear Feature Selection).

Again, the names can be confusing at times without looking at the ID's...

Is there a way to unbind F3 from Square and Finish? I have been unable to find a way.

I do not understand why ESRI took a functionality of ArcMap and removed it from Pro. Many people have different workflows and hard bound key strokes to commands is a terrible idea. The best option would be to allow all keys to be customizable as it was in ArcMap.