An option for point labels to automatically rotate as needed

I wish it were possible to get point labels to rotate (to avoid boundary lines), WITHOUT using a field to set a pre-determined rotation. I just want them to not be locked into being horizontal. Polygon and line labels seem to be able to do this - why not points?

Here is an example of one of hundreds of map pages that would be helped by this. The horizontal polygons fit the addresses inside them well, but for the vertical polygons, the addresses overlap their bounds. If they were free to be placed vertically, this would not be such a problem. 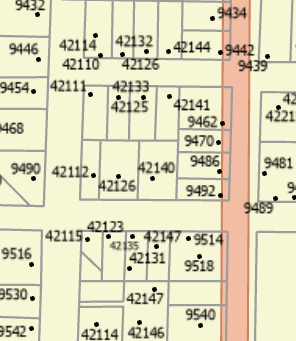 This sounds similar to https://community.esri.com/ideas/7866 but I think that one is mainly concerned with labels conflicting with one another - so allow them to automatically rotate to avoid that.  This current idea needs the label from a point feature class to rotate to fit based on a separate, in this case, polygon feature class.

I think would be way to complex of a labeling algorithm

I had a similar situation and I simply create two fields  Cardinal Direction and Rotated Direction with labeling rules such that if rotation is null it follows what cardinal is.  If not null it rotates.

I know that's what your trying to avoid but I took the time to do it for 15000 service points (over the period of a few years) and it is great because the labels will always be where I want them.  I did congested areas like your example right off the bat and that took  a couple of days.

By cardinal direction I mean I created a domain

and I had that field default to 0 for new points.  So they would be true dynamic.  So three labeling rules

Perhaps it would be too complex, I don't know much about algorithms. But they already have polygon labels rotate as needed. Plus it's up to Esri to decide what's too complex, all we do is tell them what we'd like to see