A recent update of ArcGIS Pro (I think it was 2.8.x) added a feature whereby Pro automatically adjusts the width of columns in the attribute tables so that the contents of the field are fully displayed. This has the unintended consequence of altering column widths that the user has specifically set. This is very annoying, as the user then has to constantly set the column widths back to how they had previously set the columns before Pro changed them.

I opened a support case with ESRI on this issue and they are considering implementing an enhancement rather than a bug fix. Here's what I've shared with ESRI:

"In my case, I don’t want the columns to auto resize to fit the data. I have many fields in my feature classes and I need to see as many of those fields as possible without having to laboriously scroll horizontally back and forth to see the fields that I need to see. For many of the fields, it works just fine if I can see only part of the data. So as a result, I manually resize the column widths so that I can see most of the fields, even though those fields (columns) are not wide enough to see the entire data contents.

So, to state this another way, when I manually resize the width of a column, I want it to stay that width. I don’t want ArcPro to change the width of the column. And that’s the problem I’m having. Whenever I calculate a field value, or when I stop an edit session, or pick a value from a pick list (a domain), ArcPro changes my column widths, then I have to go back and manually change them to the way I had them before ArcPro altered them."

In my conversations with the ESRI support analyst, she indicated that ESRI did not consider this to be a bug because:

"As we are asking development to implement a feature that lets users control the column width as well as keep the feature that allows data to be sized based on contents, this is an Enhancement. A bug is classified as such when the product is performing in a way it is documented that it shouldn't. We currently have no documentation, in our current or former releases, that states that column width should be static once set by a user."

My counter to ESRI's position is that just because they have no documentation explicitly stating that column widths should remain static as the user has set them, that does not negate the fact that the auto-column-resizing enhancement made to ArcGIS 2.8.x broke the previous version's behavior of not automatically changing column widths. And because the previous version did not change column widths, that was the standard behavior that users expected after upgrading to 2.8.x. It was the default, so when that default changed after the addition of the auto-resizing enhancement, with no way to get it back, users would understandably consider the new auto-resizing behavior to be a bug.

It seems completely plausible to me that when the developers added the auto-column-resizing feature to ArcGIS Pro 2.8.x, perhaps they neglected to consider and take into account alternative use cases, such as the user wanting column widths to remain static (as the user had manually resized them). I think it was probably an oversight on the part of the developers to understand that there are legitimate use cases where the column width should not automatically resize.

My suggestion to ESRI was that they should add a setting whereby the user can control the column resizing feature. I envision a setting such as this: 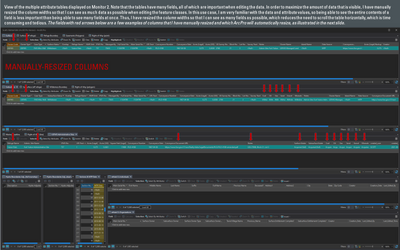 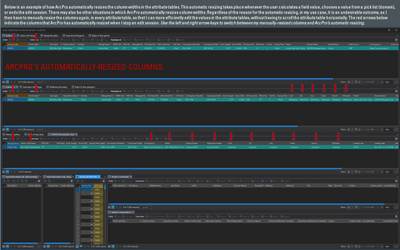 It looks like this was potentially a bug introduced in 2.8 with the updated table control (i.e. it was not a "feature" that was intentionally developed :)). Development has tested the issue, reproduced in 2.8.x and determined that this behavior is not reproducible in 2.9. Please double-check in 2.9.x and if there are still problems you are encountering with attribute table column widths resizing inadvertently, log a bug with technical support.