Pro currently provides for Picture Symbols under the standard layer Symbology tab, allowing users to import raster or vector artwork by browsing to a file – however, this ability is not available for the symbol properties within the Label Class tab (under the Symbol > General > Callout section).

Our organization has previously created custom vector artwork for our major roads’ highway shields in ArcMap, but are unable to utilize it in Pro. To be clear, importing an existing ArcMap MXD (which has this label symbology applied) into a new APRX will import the artwork so that it appears (as a Point Symbol), but the graphic/file itself is inaccessible/unbrowsable, once imported. More than that, if creating a brand new APRX (applying label symbology from scratch), there is no way whatsoever to import such graphics files. This functionality is as necessary in the label context as it is in the general symbology context for our organization.

Also, the Picture Symbols which can be imported under the Layer Symbology tab are limited to the PNG file type (where vectors are concerned). It would be helpful if the older EMF/WMF vector file type(s) were also able to be imported, since this was the format that ArcMap required – otherwise, all such vector symbols would have to be recreated/exported (from the original Adobe Illustrator files) as PNGs in order to be utilized.

So for symbology you can insert picture from Style or File 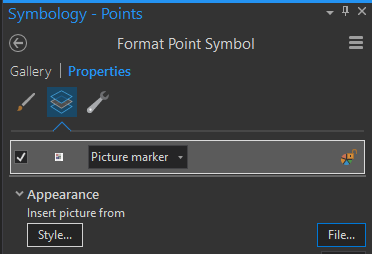 For the label callouts, when you choose point symbol this is where you'd like to see the File option as well, correct?

At present, you can add pictures to a style and then add from there.

Thanks, Kory - I'll give this a try. I'll still have to convert our existing EMFs to PNGs first, but this helps.

I hope it works for now.  The idea still stands, just wanted to throw something out there that might get you rolling sooner rather than later.