I would like the ability to copy, paste, and edit standalone tables in ArcMap just as easily as I can feature classes.  Since you cant set a table as a target, you can't copy and paste records between tables manually.  Also, when you select multiple records in the Table view for a standalone table, then right click, the "Copy Selected" option is greyed out. it would be available if I did the same thing in a feature class.

We use standalone tables alot for storing supplemental data about our features, and they are an integral component of our GIS.  They get edited almost as much as the feature classes, so it would be nice if they didn't act like "second class" objects inside the editing environment.

I totally agree.  Also, what if I want to paste table content directly to Excel for a report rather than always having to export to dBase.  Excel is much easier to format the way I want than the Crystal Reports and ESRI reporting tools that ship with ArcGIS.  I even have the full Crystal report tool available, but I don't find it very intuitive and I cannot readily export the report to others who want both the data and the ability to alter the report format for their needs.

Everyone can read Excel files and a huge number of people know how to format them.  For Features Classes I can copy records from the Tableview and paste the records directly into an Excel Spreadsheet, but I cannot for Standalone Tables.    Excel only wants the tabuar data and it is a pain to do exports to dBase all the time for Standalone tables when a simple paste would do.  The raw data from ArcGIS gets pasted under an Excel tab that I never alter or format (except perhaps to do summaries at the end with the summary tool).  I create other tabs for preformatted report pages that either use formulas to point to the raw data or else I do additional Copy operations from the cells I want and use Paste Special for Values into the report slots.

With these techniques I can create very elaborate detail and summary reports that I can share with anyone (and almost anyone I share them with can alter the format and report styles for their own purposes depending on their management reporting needs).  The Excel reports are easy to paste on to a map and reformatting the report with cell specific fonts and other customizations to fit the space I have available on the map is much easier in Excel.  The above ideas would make this even easier as well as improve the proecss of maintaining the data accuracy and integrity of Standalone Tables in ArcMap.

For features you also have the Transfer Attributes pair of tools that configures the transfer and that performs the transfer, but it is not available for Standalone Tables.  I use those tools a lot.  An adaptation of that tool that would encompass Standalone tables would be extremely useful, because a user could then predefine just those fields they want to duplicate from a source to the ones they want in a table and leave all other fields alone in a the record.  The configuration tool also works between sources and destinations where the field types are the same, but the field names are different.  The click-click work should be adapted to occur not only between features on a map, but between Tableviews on the little grey squares that are to the left of each record or any combination of the two.  So record to record transfers within a single Tableview or between two Tableviews could be an additional method of transfer that would support both features and Standalone table records.  That would be a life saver and my ideal tool fo creating and maintaining one-to-many and many-to-many relationships in ESRI.

As a final comment, I also want to point out the amount of effort and risk that is involved in editing tables where I am forced to manually copy everything but a few values from another row in a Standalone Table, especially when the table has many fields.  Something that would be done in under 15 seconds with a simple copy/paste and edit of a few columns can take more than 5 minutes for rows with 50 columns.  All but 15 seconds of that work is wasted on manual duplications of values from another row.

Performing cell-by-cell copy and paste operations from another record to the new record is exhausting and subjects the original record to corruption with an accidental paste on the wrong row.  Retyping the values in the new row subjects the new record to data entry error.  If I have many rows in a table that need to duplicate an original row I am tempted to use the field calculator to do the duplication.  But often to see the original values together with the blank rows, they both have to be selected and the field calculator can corrupt the original data and the new records simultaneously if the wrong value is in the calculator.  There is no technique to do manual data duplication of many columns between an original row and a new row that does not involve excessive work or some risk of data corruption to the new row, the original, or both.  If ESRI cares as much about protecting data from corruption as they say they do, they will implement these ideas for Standalone tables..

Since the Transfer Attribute idea just came to me as I was writing about the effects of manually duplicating information between rows I did not think through the fact that the Tableview grey sqaure next to each record already uses virtually all of the left-click combinations for record selection operations.  However, if a context menu option to "Transfer Copy" and "Transfer Paste" could be added to the Tableview context menu that would acheive the effect I want.

The appropriate context menu option above should only be enabled during an edit session if a transfer had been configured for a given Tableview with the Configure Transfer button and if the Transfer Attribute tool is active.  Two right-clicks and two left-clicks to complete a transfer within or between Tableviews of Standalone Tables and/or Feature Layers is still better than what exists today for Standalone Tables, which is nothing.  Even though Feature Layers may not need these context options in their Tableviews to effectively use the Transfer Attributes tool, this additional transfer method should not hurt anything and would provide interface consistency that would permit users to choose whatever tranfer method they prefer in the case of Feature Layers

I believe that the above proposed expansion of the Attribute Transfer tool together with the original idea proposed by RudinA would make Standalone Tables real "first class" objects in the editing environment.

Final suggestion.  Add a "Transfer Paste Selected" option for the Attribute Transfer tool in the Tableview context menu.  That would actually make the Tableview a superior means of transferring attribute data over features on a map where many records need the same attributes transferred to them in a single operaton.  This option would provide the best support for one-to-many and many-to-many relationships.  However, It would make no sense to provide a "Transfer Copy Selected" option, since that would make the paste operation ambiguous about what original record attributes should actually be pasted to the target.

by KentMarten
@rfairhur24, in ArcGIS 10 you can use the new reporting tools to create reports.  You can export reports into XLS, HTM, PDF and other formats.  I would suggest trying these tools out if you are just looking to share a professional looking report of your attribute information.

@RudinA, you should be able to copy selected rows: 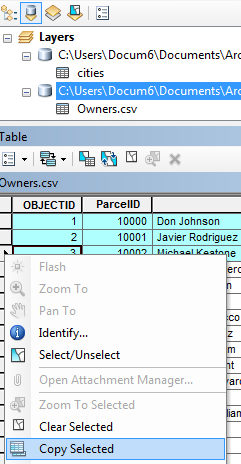 I do not have ArcGIS 10 and was unaware that at least some of these issues are apparently addressed at taht release (it will still probably be close to a year before I transition).  At 9.3.1 these capabilities do not exist.  Could you confirm that there is a Paste option as well for Standalone Tables at ArcGIS 10 during an edit session?  Your context menu snapshot does not show that option, but the menu is cut off at the bottom so I cannot be sure what other new options exist at ArcGIS 10 for Standalone table editing unless someone shows me the full context menu.

The less I have to use multiple applications to get the work done, the happier I will be, so I look forward to examining the reporting tools.  However, another major consideration for me is the integrataion of hyperlinks to legal documents and sources, which is increasingly transforming of my workflows and data models.  Unless one-click hyperlinks can be enabled directly from a tableview (which is not possible at 9.3.1), Excel provides me with a valuable speed boost for some of my data capture workflows involving hyperlinks.   At 9.3.1 there are just too many mouse clicks involved to activate them with standard ESRI interfaces.  Perhaps new hyperlink support exists at ArcGIS 10, but I have no idea.

by JanSlaats
Without the ability to PASTE (after having selected and copied rows in a standalone FGDB table),
the cumbersome work-around that works is as follows:
Although this works, it's obviously a workflow that is tedious and time consuming,
and a simple COPY and PASTE functions are needed for Standalone Tables in ArcGIS !

I now have 10 and see no ability to paste rows into a standalone table.  I am still doing the work-around mentioned by jslaats@tnc.org, which is indead tedious (although I use the load tool rather than the Append tool since my schemas do not fully match).  Features can handle pasting from schemas that both fully match and that do not fully match (although if they do not fully match you still have to join the pasted data source and calculate data into fields with different field names/types for that to work).  Tables should work the same way.

by EvanThoms
Just posted a workaround:

Given that ethorns workaround gets the job done and is so simple, it seems ridiculous that the bahavior is not built into ArcMap.  I do notbelieve that this capability go beyond ESRI's ability to make the enhancement.  A context menu for "Paste Rows" and a shortcut of Ctrl-Shift-V should be added that match the "Copy Rows" context menu and Ctrl-Shift-C shortcut that copies rows to the clipboard.  For consistency they could be only available within edit sesssion.