It depends on how your layers are set up, but I like to use FeatureSetByPortalItem, as it is not dependent upon the second layer (in this case, zoning) actually being in the map.

Getting the count is simple enough, but getting the "conditions", which I assume means a list of the unique zoning types, is somewhat more complex, but still doable.

As noted in the code, your alignment between layers will significantly impact the number of features returned by Intersects. In order to avoid false positives, it may be advisable to call "Buffer($feature, -5)" instead of "$feature", but test things out and see what results you get.

Works the similarly to the code above, but uses the "zones" FeatureSet to assemble an output array.

We use something like this to grab a parcel's intersected Flood Zones from FEMA's Flood Hazard Layer. 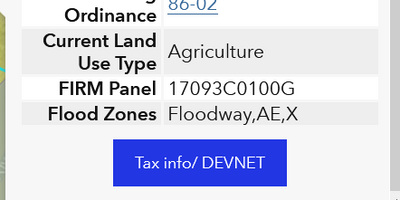 Of course, should you want the output array formatted a little more nicely, you could easily adjust your Arcade code to do that as well.

So as you can see, it's not that complicated, but does require some more advanced Arcade.

This was a very helpful post, Josh.  Thank you for taking the time to post those examples.

Thank you for your help Josh, I forgot to come back in here and tell you that this worked perfectly!

Great! Glad to hear it!