I'm creating an ethnolinguistic map in one of the province here in the island of Luzon, Philippines. I have two files which are both .KMZ files. But before that, those files went into a process of import and export. Here's the process. The main display is named as ethnolinguistic_group.kmz. It was made from a shape file, then later exported in to become a .png file so that I can edit it in Photoshop. Since it doesn't have any georeference, I imported it back to the third-party software and georectify it using the .gcp files from its former .shp format. After that, I exported it as a raster KMZ file so that I can import it in ArcGIS Online map. The same process goes for bgtest.kmz

Here is the list of files. (Ignore that test).

Clicking the "Ethnolinguistic Map . . . " web map supposedly display what it should look like as depicted from its thumbnail. The ethnolinguistic_group.kmz (the weave design) should be on top of bgtest.kmz (the blue and yellow).

But instead it shows the map like this. As you can see the bgtest.kmz is in the top of the main content ethnolinguistic_group.kmz. It should be the other way around. And the layering order is even correct.

BUT When I tried to rearrange the layers by dragging it and actually didn't change anything on it (ugh) and refreshing the browser (I'm using Mozilla Firefox), 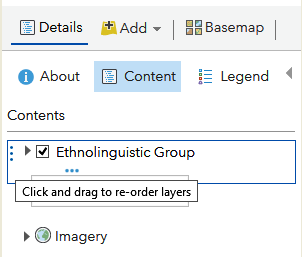 It shows this: So you see it's what I expect to show, but every time I click

to store this settings, but it doesn't. I have to repeat from the start. What if I publish this map and they won't see it because I need to remind them every time that they need to refresh it?? I don't want the viewers to that over and over again just to view this map.

Is this some kind of bug when .KMZ files are only involved and not the other supported files?? That is just so weird because what's the use of layering order when the contents doesn't follow.