So I'm hoping someone has already tried this successfully, or is at least able to definitively confirm that it doesn't work.

We're running some maps on ArcGIS Online that have features with PDF attachments on them. We did the attaching directly onto the hosted feature layers using the REST API methods.

Now we want to make offline versions of those maps for when the crews go out, but we'd like to take advantage of the fact that the AGOL features already have the attachments (as opposed to going through the linkage process with our local feature geodatabases). Since you can load AGOL features into an ArcGIS Pro map through the Catalog Pane, I thought we could set up the offline maps in Pro and just throw in the AGOL layers along with the other ones.

The hope was that since you can view the attachments in the Pro map, then creating the Mobile Map Package would also pick up those attachments and bundle them up.

But we're finding that the layers go through without any of the PDFs. And this is after making sure the Pop-Ups all have the "Show Attachment" option checked.

So yeah, am I crazy for thinking this could have worked this way and it's only doable through relationship tables in the actual geodatabases? Or is there something I'm missing?

Yes, it can work.  Make sure "Show list of Attachments" is checked in the popup configuration for the layer. 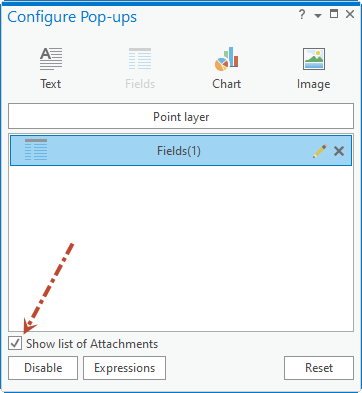 Thanks for your reply. Yes, we've made sure the "Show List of Attachments" is checked 'ON' so that the links show up in the pop-ups properly when opened in Pro. They're still not showing up in the shared mmpks when we check them in Explorer for ArcGIS though. That's why I was wondering whether there was some other setting I was missing.

that should work... any chance you could share a mobile map package with me that contains one of your features, that is supposed to have an attachment?

or, if you open the MMPK that you created in ArcGIS Pro, can you confirm the attachment is not present, and check the popup configuration settting.

OK, so we're seeing some funny behaviour when trying to open the MMPK's. Two of my colleagues are able to add and open the MMPK in ArcGIS Pro and they confirm that the feature has no attachments (and the Show Attachment option isn't even there in the Pop-Up configuration dialog).

But me and another colleague just get all the data links broken when we try to open the MMPKs in our Pro sessions. We're opening the same MMPK from the same network location and it's weird how it works for them and not for us. I guess that's a whole 'nother thing now.

But yes, the layer comes up (on their machines) without any attachments. I unfortunately can't provide that specific MMPK, but could try to make a test one that I can then share.