I have a legend item in my AGOL map where the legend is showing the wrong data.  See the image below.  The most red is the highest number (369), yellow is the lowest number (0).  In the legend on the map it has switched it so that red is low and yellow is high.  I've tried inverting and saving, but this also inverts the legend in the map so that it is still wrong. 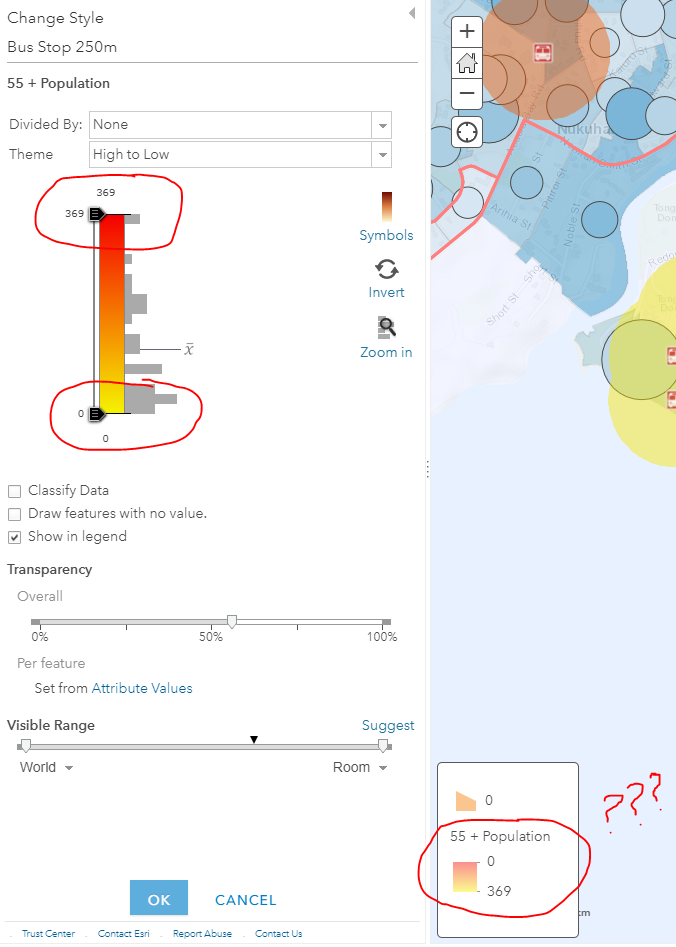 The layer was created in ArcGIS Pro.

Added into an AGOL Map.

How do I fix this?

I have opened this AGOL map into ArcGIS Pro.  Within Pro a second (different) layer which is also uses unclassed colours for symbology is now having its item within the legend wrongly flipped.

It sounds like you could be hitting the following bug BUG-000094037: A feature layer published to ArcGIS Online displays ..

I would recommend getting in touch with Esri Support and they can assist with verifying this and some additional troubleshooting. It's definitely not expected behavior. As a possible workaround, if you configure symbology in ArcGIS Online instead of in ArcGIS Pro does the legend display as expected?

Any news about this bug?

I've the same problem and the link to the Bug is opening an empty web page.

Would be great to know if it was solved.

Hope you can help

Hi Marcello, thanks for reaching out - in our internal records it looks like the bug has not been addressed yet. Would you share your web map with PeterK_ess so I can take a look?

I'm sorry, I can't share my web map and my question was more related to the BUG status.

Basically, I published a layer with primary symbolgy set as graduated colors and legend in ascending order. But the legend in the published feature service is set descending, from high to low, and I didn't find yet a way to reverse this order.

Hello! I am having the same problem as the original poster. I teach GIS labs at a university. The students used ArcGIS online to create a web map during a virtual lab. Then brought in the web map into Pro to create a layout. The legend for census tracts showed the opposite in the map display. See attached. Any progress on this bug? Thanks!!

Hi @ElizabethZizzamia1 - no update on the bug unfortunately - I am working on following up with the team on it though. If you want to email me at pklingman@esri.com with your customer number I would be happy to attach your account.

Can you provide a link to the bug? I am unable to find it and want to see if it applies to an issue I am running into.