I'm having some trouble getting a hosted tile layer to display in a 2D web app. Tile layers show up in the web map viewer, but not when the same map is viewed through a web app. I am able to see the tile layers in the web app if they are moved to basemap. When using 3D scenes everything works as it should.

The issue seems to only affect layers I've uploaded after the recent ArcGIS online update. Tile layers that were already in my account work as they should.

The tile layers use a custom tiling scheme set to allign with basemaps in ETRS89_UTM33. I've not had any issues with this in the past.

Any idea what could be the cause of this?

We ran into a similar issue when we uploaded tile packages after the latest ArcGIS Online release (I believe it was released during the week of Dec 3). Our workflow: 1) generate a tile package in ArcMap or Pro. 2) Select the option for it to be uploaded to AGO immediately (as opposed to outputting the tpk file to a specified local directory). 3) Publish the tile package as a service. 4) Create a web map.  5) Add a base map from our county's ArcGIS server (wkid 2915, same as our tile package). 6) Add our tile package and receive the error "The layer, xxx, can't be added to the map because its coordinate system or tiling scheme can't be adjusted to align properly with the basemap"

After trying to resolve this issue with ESRI tech support, they logged this issue as BUG-000118772 yesterday evening (Dec. 12). The status of this bug has already changed to 'implemented' which, to the best of my understanding, means they have fixed it, but it won't be rolled out until an upcoming release.

One work around that we almost had to live with: 1) add the tile package layer to the map first. 2) add the base map tiles from ArcGIS server without checking the option to make it the new base map layer. 3) make the base tiles, which is on TOP of the tile package, transparent. The transparency effect was almost the same as if the layer order was the opposite. But this created another problem: the map's legend showed the base map layers (which were on top). We really needed a legend for the tile package (which was being treated as the base map). So we ultimately had our county's central GIS staff create a tile cache on their ArcGIS Server. Then we could build AGO web maps by pasting our server's REST URL.

As you've experienced, tpk's uploaded that we uploaded prior to the latest release did not cause any problems in AGO web maps. Shortly after we encountered the problem yesterday, we started looking into the JSON for the tile package REST service. The 'well know text' of the spatial reference was appearing repeatedly (see screen shot below).  The JSON for the tiles served by our ArcGIS Server and the JSON for the tpk files we uploaded to AGO before the latest release did not do include this. And I strongly suspect that's why we got the error message when we tried to add them both to a web map.

I hope you're able to find a feasible work-around. We barely met our deadline because of this setback....... 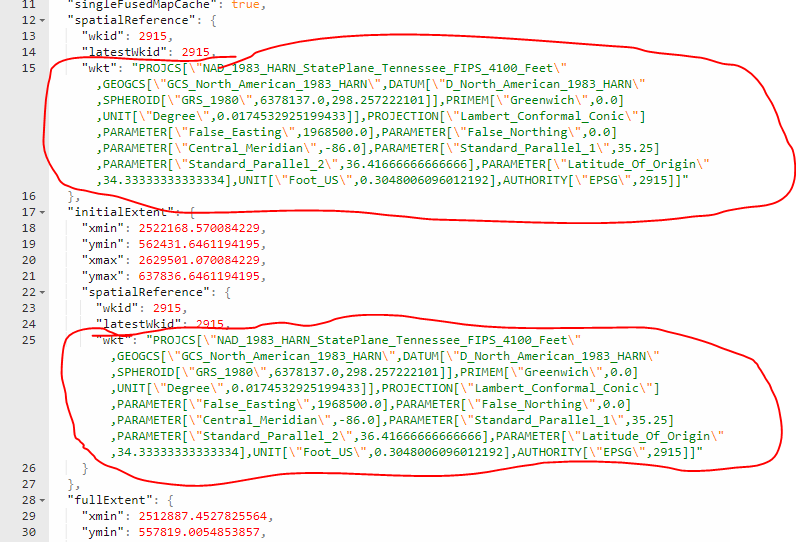 Which app? Are your webmap/app public? If so can you share the link?

This is the Map Series app that displayed the first draft of our city's comprehensive zoning update: https://maps.knoxmpc.org/MapSeries/recode.html?appid=daa100e704b44ea7825e3202943f9fcd.  We started working on updating this page for Draft 3 this past Monday.....and that's when we ran into this bug. Draft 3 hasn't officially announced on our web page, so I'm not going to post it here. But we essentially made a copy of the Draft 1 Map Series app using the ArcGIS Online Assistant.

When we were developing draft 1, we also downloaded the Map Series and Compare apps to our local web server to make a number of style changes. But then we also created and configured those apps on AGO and then linked to those AGO apps via the appid in the URL above. All of the maps that are featured in the map series are web maps that we created in AGO - except for the first tab, it's a custom javascript web page that includes some functionality that our planners asked for (drive to an address or parcel id, return the clicked zone).

We haven't really had a problem with these "configurable apps". We ran into the bug when we tried to make new web maps in AGO using the tile packages that we created by using the same workflow we used for Draft 1 and Draft 2. That workflow is described above. As I mentioned, we ditched the tpk's and had our county host the updated zoning layers (the operational layer) on our ArcGIS server. Then we created web maps in AGO that reference the REST endpoints on our county's server.  Then we pointed the Draft 3 Map Series and Compare apps at those newly created web maps. Thankfully, we were on time, but it was close.

Thanks for the reply. I've done some testing now and it seems like the tile layer displays in the web app when the layer is set to public sharing. When I share the layer with specific groups or our whole organization, it doesn't work even if I'm signed into ArcGIS online in my browser. The problem is that we don't really have the option to share the app I'm building nor the data it uses publicly as it will only be used by specific individuals.

This is one of the layers we've been having issues with:

On Friday afternoon (Dec 14), ESRI notified me that they had applied a patch to ArcGIS Online to fix this issue. I am now able to overlay AGO hosted tile layers in our state plane projection on top of a tile layer served by our county's ArcGIS Server. We have to add the base tiles (AGS service) first and then specify them as the base layer. Otherwise, we cannot view both layers.