I'm having issues when it comes to editing a hosted feature layer in ArcGIS Pro. Screenshots are included below the text.

Essentially, when I make updates to some layers within a hosted feature layer, the edits will show in my map frame in ArcGIS Pro, but it won't show in that same hosted feature layer on a webmap. Additionally, despite the updates showing in my map frame, when I look at the attribute table, those records aren't even there. If I select the area where they should be, it'll say that those features are selected, but the attribute table doesn't actually show those records so they technically don't exist.

I've tried updating the layers via a simple copy and paste and via the append tool. Note that the schema's are the same (apart from the global ID in the online layer). I even tried exporting the online layer to a local feature class, pasting in the required updated features in that feature class (so the schema is exactly the same), but again - same issue.

Also note that no definition queries are set and symbology classes aren't defined (they're all set to single symbol) so these aren't the causes of the issue. Additionally in the settings for the item page of the hosted feature layer in question, editing is enabled. Lastly regarding the attribute table, I have tried closing and re-opening the table to force a refresh, but the result is the same.

Any help would be greatly appreciated!

Update 2021.06.03: Doing a "deep refresh" in ArcPro (Ctrl + F5) completely refreshes the layer and removes the features that are apparently in the feature layer despite not have attributes in the attribute table. This helps somewhat but doesn't answer any questions as to why appending data isn't working despite the append saying that it was successfully completed.

Update 2021.06.04: We also tried pulling an offline replica to add the desired data. We tried the append, ut as a geoprocessing tool, but also as a Python script that started and stopped an editing session in  Pro, and lastly we tried a straight copy and paste. The features would draw in Pro and show in the replica's attribute table, but would not show up on the webmap or the data tab of the feature layer.

Example of the hosted feature layer displaying the update in ArcGIS Pro, but not carrying over to a webmap.

Second example where the features that have been appended are displaying fine in the map frame, yet they don't have any actual records associated with them in the attribute table and do not display in a webmap.

When selecting the visible features, the attribute table looks like this. Note the bottom left where it says, "34 of 0 selected" 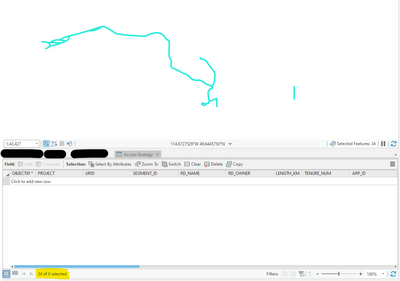 Does the hosted layer have editor tracking on? And is it a view layer?

Thanks for your reply Josh! The hosted layer has editing on, but not editor tracking on. And it is a hosted feature layer that I'm trying to perform the updates on - not just a view layer.

Hm. Well, those were the two issues I've had that showed similar behavior.

Does the layer even allow you to save your edits? And it's not an offline replica that you sync, is it?

Here's two things you could do to look into this further:

Thanks for this Josh! Appreciate the info. I didn't know of the diagnostic monitor previously and that's a great thing to know about.

To answer your above questions:

The layer does allow to save edits. We tried a straight copy and paste to trigger an editing session. We're able to save the edits and we can see it in Pro, but not in the attribute table or on the webmap. Additionally, when we do a "deep refresh" (Ctrl + F5), the features then no longer draw.

Regarding offline replicas and syncing, the first method I was trying was pulling the feature layer in directly to Pro via Catalog > Portal so it was the direct online version. We also ended up trying pulling an offline replica to see if that worked.

With the offline replica, we tried the append. The appended features would be present in Pro and also in the attribute table, but not on a web map. We even checked the item page > Data tab for the layer to see if the was transferred in but just not displaying, but the records weren't there either.

The last thing we tried was a straight copy and paste to add the features in as that would have to start an editing session by default. Same result - the features would show in Pro and the attribute table, but when synced with the online layer, the features wouldn't actually be there.

We're not sure what to do and we'll likely be logging a ticket with ESRI to figure out what's going on. Will keep this thread updated when/if we have a solution.

Thanks again for your advice! Much appreciated.

I've had this happen as well with both hosted and non-hosted layers.  It seems ArcPro might do a kind of cache because edits will show immediately in collector, but lag in ArcPro.  We're kind of thinking that our network firewall might play a role because it seems to only happen at our office -- when we were working from home it wasn't happening.

Thanks for the context of your experience David! Much appreciated. Still not sure what's going on. I'm working from home and in addition to that, some layers worked with an append whereas some didn't. So weird! Will be sure to keep this thread updated once/if we find a solution.