I thought I would post this here and see if anybody is having similar issues. The issue: having a webhook activated on a feature service is interfering with various forms of editing. I have narrowed it down to the webhook being active; when toggled off, normal functionality resumes. When toggled back on, problems come back.

You can reference this this blog post for background on the general workflow.

My workflow: I maintain features in a feature service. This service is then edited by field staff using Survey123. I have a webhook on the feature service so that, when certain conditions are met in the feature, a Feature Report is generated. This is all done in Integromat. This workflow functioned beautifully for a few weeks.

The symptoms: The feature service seems to have issues with being edited. With the feature service webhook active, the Survey123 mobile app shows a generic error when an update is submitted. However the data carries through.

Certain editing operations are also having trouble for the feature service. I can make edits to existing features in the service (attributes, geometry, and can delete), but can't seem to add data en masse (which is critical to my workflow). If I try to copy features into the webook-active service, I get this: 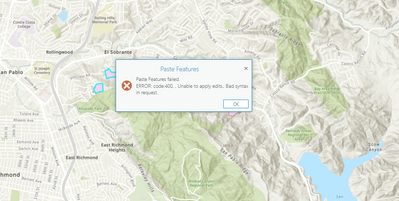 If if I try to append data into the service I get this: 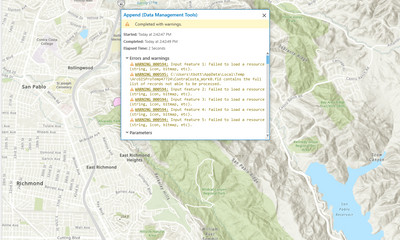 The warning above deals with the XY domain. I played with every environment setting in the tool, same result. Stranger still: If I use either copy/paste or the append tool and I enable undo and discard the edits, the features still show. Sometimes it's the ghost of those features...they'll pop up at certain scales and not be selectable. Other times, and this happened when I was trouble shooting and re-running the tools several times, I would close the project or remove the feature service and all of the attempts would show up. There'd be 10 of the same feature stacked on top (even though I discarded the edits).

None of these errors throw if I deactivate the webhook on the feature service. They will instantly stop and functionality will resume.

I have replicated this on multiple feature services, and today generated an entirely new service to test it again, and same story. I cannot pinpoint this to exactly when the AGOL update took place but it was certainly around then. I'd love to know if anybody is having similar issues or if there are solutions out there. The webhook and adding several features at once are both critical.

Replying in case anybody comes across with this with the same issue and is looking for solution.

The problem is 'resolved' by using View layers. You can activate webhooks on the feature service, and then you can create view layers to both generate a survey from or use for editing. As long as you're using the view it doesn't generate the errors and webhooks can still be activated. Downloading an offline copy of the map (i.e. mobile geodatabase) and syncing also serves as a workaround.