Turn off "Edited by" line in the pop ups by default

When looking at an AGOL web map the pop ups include an "Edited by" line at the bottom. 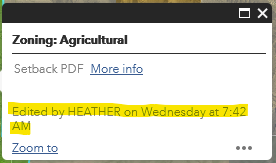 This information just causes confusion for our end users, especially member of the general public.

Our layers are hosted in Portal and brought into AGOL as REST services (the "Add layer from web" option).  Creating hosted feature layers for all of these services is not an option.  If I wanted this information distributed in a pop up I would configure the pop up appropriately.  I am aware this setting can be controlled with a hosted feature layer (per image below), but to ONLY be able to control this setting from a hosted feature layer is problematic.  I am also aware that removing the fields entirely from the referenced dataset (or turning off Editor Tracking) is an option but is also problematic in an Enterprise system. 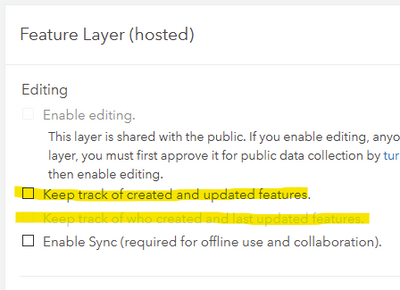 This problem has asked about since 2017 and the answer always ends up being, "Make it a hosted feature layer."  I'm suggesting for everything else you only include information in the pop up the user specifies. 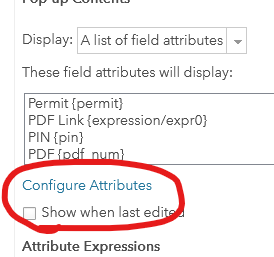 Seems like it shouldn't be too hard to include this on anything with editor tracking fields.

Turn it off before you publish. It is  an option where you are not going to please anyone. So by default everything is set to visible.

In your Project turn the field off before publishing.

@RobertBorchert, I'm not sure what you mean by "turn the field off".  Could you elaborate, please?

What are you using to publish the service?

@RobertBorchert, currently we're publishing services from ArcMap mxds.  We plan on shifting to Pro for our service creation in the future but are not to that point yet.

Open the MXD you publish from.  Open the Layer Properties for the Feature you don't want to see the field of.

Under the Fields Tab, uncheck the fields you do not want to see.

On a side note I bit the bullet about a year and a half ago and switched to Pro.  ArcMap (to me) is far superior for almost all your editing needs.  But Pro was built for online and it works very well.

"Open the Layer Properties for the Feature you don't want to see the field of.

Under the Fields Tab, uncheck the fields you do not want to see."

@RobertBorchert  - This.  This is it. **Edit - This is almost it. It doesn't work for feature services. Even with the fields turned off before publishing, the fact that editor tracking fields even exist is enough to show that stupid "Edited by" line in the popups, provided the layer will publish at all (per KE's comment in this thread: https://community.esri.com/t5/arcgis-online-questions/arcgis-online-no-data-in-published-feature-ser... ). So the only way to make this go away is to disable Editor Tracking, which is not an option as stated before.

I did not know that turning fields off could be done at a layer level. (right-click a layer -> Design -> Fields, uncheck the fields you don't want visible *with the exception of the Shape field, which ever field is designated as the "Display Field" in the layer properties, **Edit - and the Editor Tracking fields, which much be visible to publish the layer*).  No where (or one) ever mentioned that this.

I still hold by my Idea above that this should be disabled by default, because this is still annoying and problematic.