The cross validation plot shows that high measurements (~between 3 and 5) are overestimated (blue line below grey, predicted on x-axis, measured on y-axis): 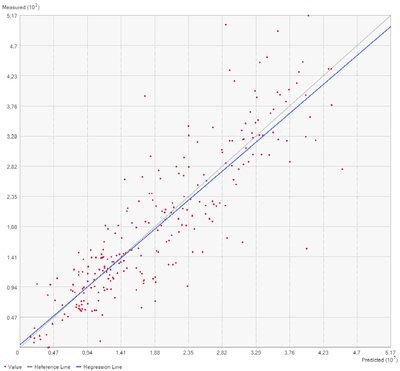 The standardized error plot indicates underestimation for the same data and value range (~between 3 and 5): 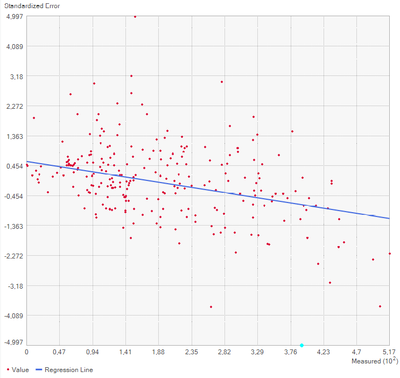 I may misinterpret these plots, but this seems contradictory.

The cross validation was carried out in ArcGIS Pro 2.5.0.

Is this related to methods in the Geostatistical Analyst?

I guess this is part of the Geostatistical Analyst Extension?

I think the slopes of the blue trend lines is causing the confusion.  If you ignore the blue lines for a minute, notice in the first graph that most of the largest measured values (the points highest on the y-axis) generally fall above the 1:1 gray line, indicating that they are underpredicted (ie, the prediction is less than the measured value).  The corresponding points on the Standardized Error graph (the points furthest on the right) generally do have negative standardized errors, indicating that they were underpredicted. Ignoring the trend lines, I hope you can see that the scatterplots and their values do not contradict each other.

Second, the blue trend lines use a robust estimation technique and are not just simple linear regressions.  The documentation describes this process as: "This procedure first fits a standard linear regression line to the scatterplot. Next, any points that are more than two standard deviations above or below the regression line are removed, and a new regression equation is calculated."  This removal of values could be subtle enough to switch the sign of the slope.

Hi Eric,
thanks for your detailed explanations! I agree that the blue line is the problem. It seems like the regression does not properly represent the point cloud. Your explanation (outliers > 2 standard deviations ignored) makes sense though. However, this makes results quite counterintuitive. Particular because the same procedure appears to have not the same effect in the standard error plot causing some ambiguity.
Moreover, in older version of ArcGIS the cross validation plot showed ‘predicted’ on the y-axis and ‘measured’ on the x-axis. This is why I expected some kind of bug.
Regards,
Christian

The unstandardized error plot has also a negative slope: 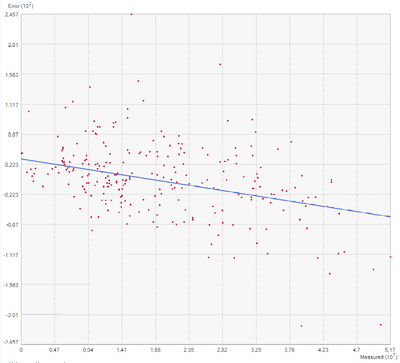 Which in turn contradicts a slope < 1 in the unstandardized predicted-measured plot: 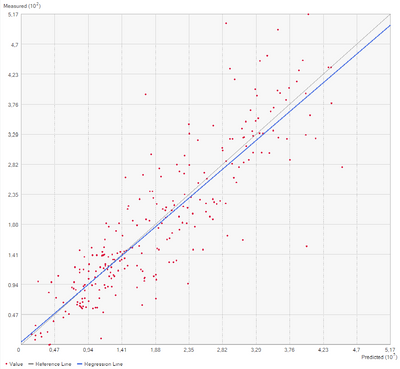 Some outliers may have been ignored in the regression (sigma > 2). But why only in this plot?